100 Years Ago: The Gorlice-Tarnów Offensive & the Great Retreat Underway

In May 1915 a German/Austro-Hungarian offensive was launched against Russia that would result in the greatest victory of World War I by the Central Powers.

When: First Phase, 2 May – 22 June 1915
Where: Primarily in Poland, Starting Southeast of Kraków 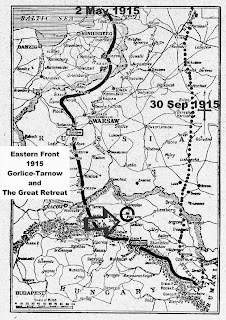 For 1915 the chief of the German General Staff, Erich von Falkenhayn, had decided to look to the east.

The Gorlice-Tarnów Offensive succeeded beyond all expectations: one after another, Russian defensive lines were penetrated. Fortress Przemysl was recaptured, and Warsaw fell.

Then, on 9 July Russia's supreme commander, Grand Duke Nicholas ordered a scorched-earth retreat. By September, Poland and Galicia were lost and the Eastern Front was 300 miles east from its August 1914 starting point.

Greatest Victory by the Central Powers in WWI —

Possibly the worst result of the defeats — the tsar named himself commander-in-chief, leaving the tsaritsa and Gregorii Rasputin free to meddle in affairs in Petrograd.