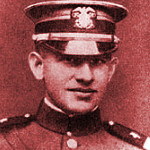 Charles H. Hammann was born in Baltimore, Maryland, on 16 March 1892. He was appointed an ensign in the Naval Reserve Flying Corps during World War I. On 21 August 1918, while piloting a Navy seaplane near Pola, he landed on the Adriatic Sea to rescue Ensign George H. Ludlow, whose aircraft had been shot down by Austro-Hungarian forces. Though Hammann's plane was not designed for two persons, and despite the risk of enemy attack, he successfully completed the rescue and returned to the base at Porto Corsini, Italy. He was awarded the Medal of Honor for this exploit.