As a graduate of a USAF one-day stretcher carrying course at Sheppard AFB, TX, I have a place in my heart for the stretcher bearers of the Great War. 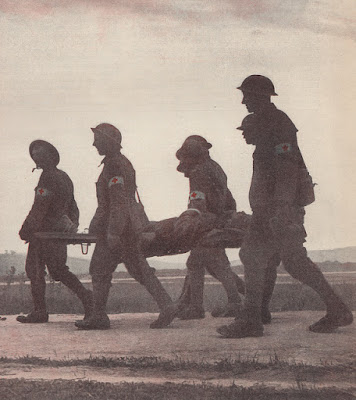 Slowly we worked our way along the trenches, our only guide our feet, forcing ourselves through the black wall of night and helped occasionally by the flash of the torch in front. Soon our arms begin to grow tired, the whole weight is thrown onto the slings, which begin to bite into our shoulders; our shoulders sag forward, the sling finds its way into the back of our necks; we feel half suffocated, and with a gasp at one another the stretcher is slowly lowered to the duckboards. A twelve-stone man rolled up in several blankets on a stretcher is no mean load to carry when every step has to be carefully chosen and is merely a shuffle forward of a few inches only.


One fondly remembered poet, Robert Service, had close contact with stretcher bearers and chose to honor them:

My stretcher is one scarlet stain,
And as I tries to scrape it clean,
I tell you wot — I'm sick with pain
For all I've 'eard, for all I've seen;
Around me is the 'ellish night,
And as the war's red rim I trace,
I wonder if in 'Eaven's height,
Our God don't turn away 'Is Face.

I don't care 'oose the Crime may be;
I 'olds no brief for kin or clan;
I 'ymns no 'ate: I only see
As man destroys his brother man;
I waves no flag: I only know,
As 'ere beside the dead I wait,
A million 'earts is weighed with woe,
A million 'omes is desolate.

In drippin' darkness, far and near,
All night I've sought them woeful ones.
Dawn shudders up and still I 'ear
The crimson chorus of the guns.
Look! like a ball of blood the sun
'Angs o'er the scene of wrath and wrong. . . .
"Quick! Stretcher-bearers on the run!"
O Prince of Peace! 'ow long, 'ow long?


Long after he had gained fame as the poet of the Yukon ("The Shooting of Dan McGrew"), Robert Service (1874–1958) made his way to the Western Front as a Red Cross ambulance driver. During his service he continued to write poems, which were collected in the volume from which "The Stretcher-Bearer" was selected, titled "Rhymes of a Red Cross Man". He dedicated the work to his brother, Lt. Albert Service, who was killed in Flanders in August 1916.