Three Naval Heroes of the War


All three officers shown here were awarded their nation's highest honor for notable service in the Great War. 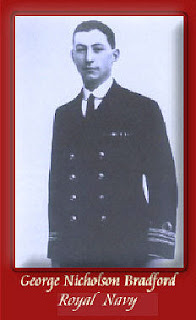 Lt. Commander George Nicholson Bradford (1887–1918) had demonstrated his heroic nature in 1909 when he led the rescue of three men from a fishing trawler that had been rammed by his ship HMS Chelmer. During the April 1918 raid at Zeebrugge. Bradford's converted ferryboat* HMS Iris, carrying a Royal Marine assault force, was unable to secure itself to the dock.  Bradford was killed trying to set the grappling hooks while exposing himself to enemy fire. With the posthumous award of the Victoria Cross, he joined his late brother Roland Boys Bradford to become the only brothers to be awarded the honor in World War I.
(*corrected from original posting.) 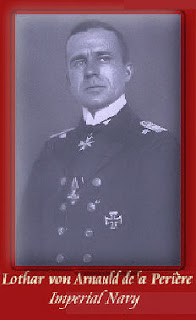 In 1903, when he was 17, the future Kapitänleutnant Lothar von Arnauld de la Perière (1886–1941) joined the German Navy. Before the war he served as torpedo officer aboard the cruiser Emden. Then he became aide-de-camp to Grand Admiral von Tirpitz and was serving on the Admiralty staff when the war started. First, von Arnauld tried for a zeppelin command. But with no zeppelin commands available he eventually found himself taking command of U-35. From January 1916 to March 1918 he racked up a formidable record, sinking 194 ships totaling over 453,000 tons. Under his command, U-35 fired only four torpedoes, one of which missed the target. Von Arnauld's weapon of choice was his 88mm deck gun. He was awarded the Pour le Mérite and asked for and got an autographed photograph from the Kaiser. Recalled to service in the Second World War as an admiral, he was killed in a plane crash at Paris in 1941. 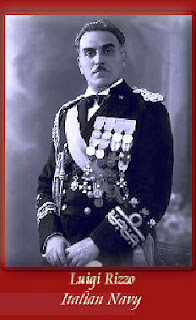 Capitano Luigi Rizzo (1887–1951) started the war as a naval reservist and eventually became a double recipient of Italy's Medaglie d'Oro al Valor Militare, as well as three awards of the next tier, silver medal.  He commanded the high-speed motorized torpedo boats that sank the Austrian battleships Wien at Trieste in December 1917 and the Szent István in June 1918.  The Italian king awarded him the title "Count of Grado." His WWII service included the assignment of destroying Italian ships before the German navy could seize them when Italy left the Axis powers.  His success did not sit well with the Germans and he was taken prisoner by the Gestapo for the remainder of the war. He survived and was repatriated to Italy after the war. Rizzo died in 1951, holding the rank of admiral.