James Norman Hall (1887–1951) was born in Colfax, Iowa, and educated in his home state. At the outbreak of World War I, Hall joined the British Army, serving in the 9th Battalion Royal Fusiliers, taking part in the Battle of Loos. Hall published his war memoirs in 1916 under the titles Kitchener's Mob and High Adventure. Hall reenlisted in 1916 as a member of the Lafayette Escadrille, underwent air training, and was assigned to Squadron 124 on 16 June 1917. Ten days later he was seriously injured in a crash. 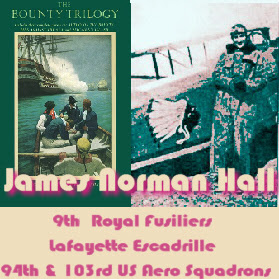 When America joined the war, Hall transferred to the American Air Service serving with the 94th, then the 103rd Aero Squadron. In May 1918 Hall was shot down behind German lines and then spent the last six months of the war in a prison camp. Late in the war he met Charles Nordhoff, another American pilot who had served in the war with French units. The two men won a commission to write a history of the Lafayette Flying Corps inclusive of the Lafayette Escadrille.

When Hall and Nordhoff subsequently received an advance from Harpers to write travel articles, they moved to Tahiti. In 1921 appeared their travel book Faery Lands of the South Seas. Hall continued writing travel books and with Nordhoff published novels. In 1925 Hall married Sarah Winchester; his friend had married a Polynesian woman a few years before.

In 1929 appeared Nordhoff's and Hall's jointly written book about flying, Falcons of France. After Hall's suggestion the team started to write Mutiny on the Bounty (1932), the story about charismatic Fletcher Christian and Captain William Bligh. Two additional volumes of the series were published in 1934, and the following year saw their work filmed in one of Hollywood's greatest epics, starring Clark Gable and Charles Laughton. Hall died in Tahiti. His posthumously published memoir, My Island Home, appeared in 1952.
_______________
* This photo replaces our originally incorrect image, which showed Lafayette Escadrille founding member Bert Hall. (We got our Halls confused.)  Thanks to reader Karen Tallentire for catching this.