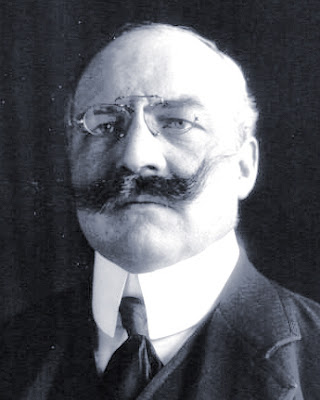 Adolph Messimy (1869–1935) made his mark in both the political and military spheres of France during the war. At the start of the war he held the position of Minister for War for the second time in the administration of René Viviani. He had worked his way to the top as a professional politician after retiring from the army in 1899. Messimy, however, received some of the blame for the failure of Plan XVII and resigned before the month of August 1914 had ended. His had been one of the authorizing signatures on France's mobilization order.

He rejoined the army as a reserve captain and proceeded to serve with distinction in the Vosges sector where he was wounded. A colonel by 1916, he was again wounded at the Somme. His rise in grade continued throughout the war and he ended his military career as a general and divisional commander. Afterward he returned to his political career with mixed success.

[In case you're wondering: yes, the editor did think General Messimy's image was a perfect Gallic match for General Ludendorff.]