Visitors to Verdun who feel that they have seen the sights and wish to visit the wider area may like to spend a day in the open, rolling countryside to the south of Verdun, visiting such places as Nixéville or Landrecourt, which—sleepy and forgotten today—swarmed with men during the battle of Verdun. To my mind the most pleasant way of visiting this area is to drive along the Voie Sacrée, or Sacred Way. This is the great supply and evacuation route that saved Verdun at the beginning of the battle and worked non-stop throughout all the months of war. There are, of course, many military cemeteries in the area and in one of them lies Corentin Carré, the youngest French pilot of the Great War and possibly one of the youngest on the Western Front.

Among the men who rushed to volunteer when war broke out, Corentin Carré holds a special place. Born in Le Faouët, Brittany, France, on 9 February 1900, Corentin was 14 when war broke out. When his father was mobilised in August 1914, he tried to persuade the local authorities to let him sign up under the name of his half-brother. When this was refused, he took himself off to another part of France where he was unknown and signed up in April 1915 under the name of Auguste Duthoy, a native of a town in the Ardennes region which was then under German occupation. This made it impossible to check whether the name was correct and Corentin was posted, first, to the 41st Infantry and then the 410th Infantry, which had just been formed. After training, he was sent to the front in the Champagne sector in October 1915.

It was the start of an extraordinary career. Beginning as a private soldier, Corentin Carré, known as “le petit poilu," was promoted to corporal in February 1916. In June 1916 he was wounded. He was made a sergeant later the same month and, in November 1916, following various courageous exploits, he was cited in army orders and received the Croix de Guerre.

By December 1916, however, Corentin Carré’s conscience had got the better of him and he wrote to his colonel to ask to sign on again under his real name, saying that he now had his father’s authorisation to do so. He was allowed to do so, although he temporarily lost the promotion to adjutant that—at 16 years and 10 months—he had already received. He soon recovered his rank and in June 1917 was once again cited in army orders.

But by now Corentin had other ideas: he wished to become a pilot. He began training on July 1917, received his pilot’s licence in October of the same year and in December was posted to S.O. 229 squadron, which was stationed at Lemmes—another little town on the famous Voie Sacrée. This squadron carried out photographic missions and artillery observation. On 19 March 1918 Corentin was carrying out an observation mission when he ran into trouble. According to the official version, his plane was attacked by three enemy aircraft, but no German plane appears to have claimed the victory and it is possible that his plane was hit by anti-aircraft fire. He managed to bring it down and was taken, badly wounded, to hospital at Souilly, where he died on 22 March 1918. He had just turned 18. 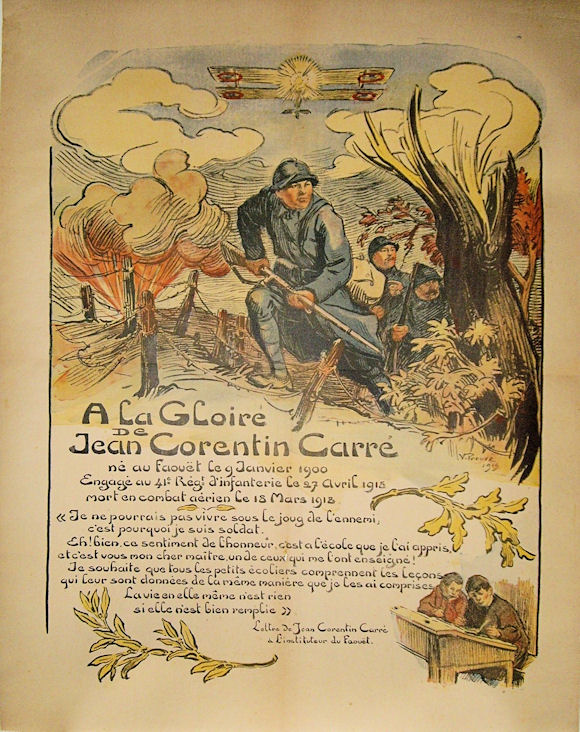 Corentin Carré was at first buried at Souilly but was subsequently reburied in plot 1510 in the military cemetery at Rembercourt-aux-Pots, Meuse, France. A monument to the famous “little poilu” stands today in the centre of his home town of Le Faouët.

If you decide to drive south on the Voie Sacrée, spare a thought for this extraordinary young man. Turn west at Chaumont-sur-Aire and take the little road to Rembercourt. It is only a tiny place. The massive fortified church, a witness to the former rivalry between the Dukes of Lorraine and Bar, stands guard over a village composed of a café, a few houses, some farms and two military cemeteries. Far from his native Brittany, Corentin Carré, his spectacular career now largely forgotten, lies at rest with few visitors and only the larks for company. He was one of France’s youngest and finest young men; who knows what he might have achieved?