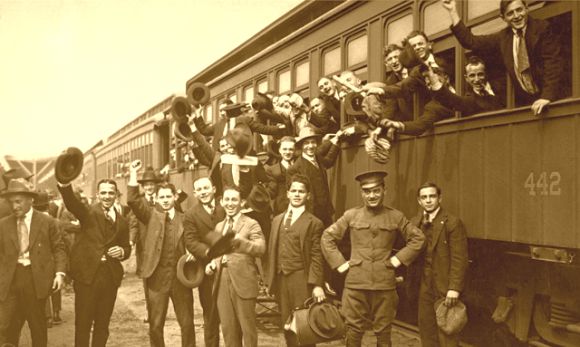 By Mark D. Van Ells
From the American Legion Website

A century ago, George M. Cohan’s song “Over There” rallied the American public behind the Doughboys in France during the Great War. Today, World War I centennial events are helping Americans rediscover their nation’s role in that titanic conflict. Memorials, museums and historic sites are a popular way to connect with the past, and thousands travel across the Atlantic to visit the battlefields of Europe. However, there are plenty of places “over here” in America where one can also walk in the footsteps of the doughboys.

The best place to begin exploring stateside World War I sites might be the Army’s 32 training camps where civilians became soldiers. They spanned the country, from Camp Devens, MA, to Camp Kearny, CA. Hastily constructed in the summer of 1917, the camps received the first troops that September, and by the time the war ended 14 months later roughly four million people had passed through their gates.

Seventeen camps are still military property, and many have history museums that chronicle the Doughboy experience. Fort Jackson, SC, for example, is home to the U.S. Army Basic Combat Training Museum. Fort Lee, VA, has two: the U.S. Army Quartermaster Museum and the Army Women’s Museum. The Lewis Army Museum at Fort Lewis, WA, is in the old camp recreation center the Salvation Army built for trainees during the war. Though located on active military installations, these museums are open to the public. A civilian must obtain a visitor’s pass to see them, and photo ID and vehicle registration (if entering by car) are normally required.

The fate of other camps varied considerably. Camp Logan in Houston is now Memorial Park—a welcome green space in that sprawling city. Camp Upton on Long Island, NY, is home to Brookhaven National Laboratory, a scientific research center. Like many training sites, Camp Taylor in Louisville, KY, is now a residential area. Single-family homes stand where barracks, mess halls, and warehouses once did. In recent years, the last World War I structures have been demolished, though the Camp Taylor Historical Society is working to preserve memorials and erect a museum dedicated to the Great War heritage of the neighborhood.

Other training sites have also given way to suburbia. Strolling through certain neighborhoods in places like Montgomery, AL (Camp Sheridan), Fort Worth, TX (Camp Bowie), or Menlo Park, CA (Camp Fremont), the careful observer spots camp-related monuments, plaques, and historical markers in local parks or along the streets.

Soldiers received specialized training at stateside posts, too. For example, the Great War saw the advent of the tank, and many doughboys learned to operate these fearsome new machines. One tank training facility, Camp Colt, was located right on the Civil War battlefield at Gettysburg, PA. Amid the lavish memorials to the Blue and the Gray are a few subtle reminders of World War I. Just off the Emmitsburg Pike, on ground Pickett’s men charged across in 1863, stands a lone pine tree marking the headquarters of Camp Colt’s commander, Capt. Dwight D. Eisenhower. It was Ike’s first command.

Continue Reading the Article at: