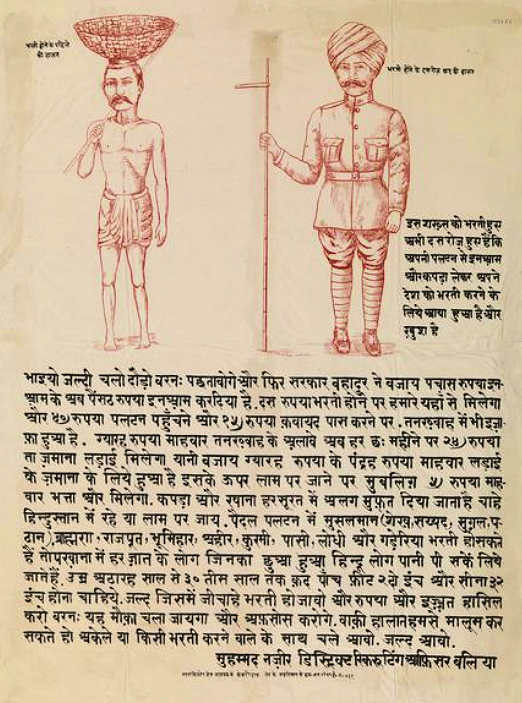 The caption reads:
‘Before enlistment…’ The right hand caption reads: ‘Ten days after enlistment… This person has been a recruit for ten days and with his bonus and his uniform he is going to enlist others of his locality and he is happy.’
The main body of the text reads:
‘Brothers, rush, run to enlist or you will regret it later. The Sarkar Bahadur [the honourable Government] has now raised the enlistment bonus from Rs.50/- to Rs.65/. You will get Rs.10 on enlistment, Rs.40/- when you join your regiment, and Rs.15/- on completion of training. The pay has also been increased.
In addition to the monthly wage of Rs.11/- you will get Rs.24/ every six months for the period of the war. Your monthly wage therefore is not Rs.11/- but Rs.15/-. In addition on going on active service you will get a monthly allowance of Rs.5/-. Clothes and food are free whether you are in India or have been sent to the war.
The following can enlist in the infantry: Muslims (Shaikh, Saiyyid, Mughal, Pathan), Brahmin, Rajput, Bhumihar, Ahir, Kurmi, Pasi, Lodhi and Gaderiya. In the artillery anyone can enlist from whose hands Hindus would accept a drink of water. The age should be between 18-30 years, height 5ft 2" and chest 32".
Enlist speedily in whichever unit you choose, and earn rupees and respect, or you will rue the loss of this opportunity. For further details contact us. Come on your own or with some recruiter. Come quickly. Mohammad Nazir, District Recruiting Officer, Ballia.’
The text translated by Professor Radhika Singha for the Imperial War Museum