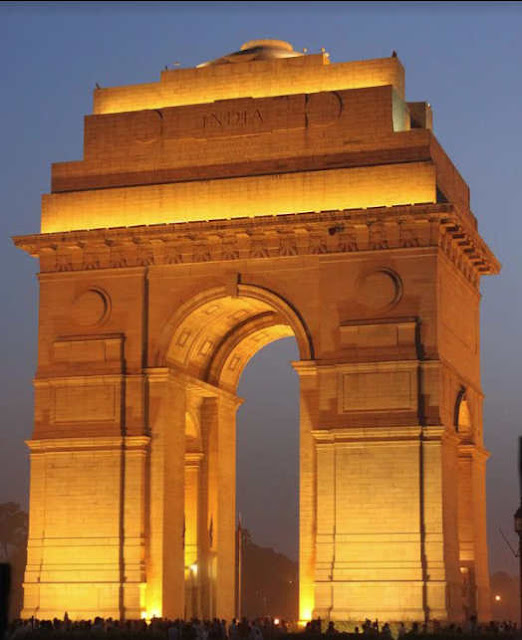 Depicted above is the second tallest Commonwealth War Graves Commission (CWGC) memorial to the missing. The CWGC calls this the "Delhi Memorial," as it’s located in the Indian capital city of Delhi (the name New Delhi has gone out of favor). This monument is 42 meters tall, while the Thiepval Memorial in France is 54 meters.

This colossal structure was another work of Sir Edwin Lutyens, the foremost British architect of his time, who also designed Thiepval  and the Whitehall Cenotaph in London, amongst many monuments and memorials. His design is deliberately evocative of the slightly taller (50 meters) Arc de Triomphe in Paris, which he called a "universal architectural style free of religious ornamentation." The cornerstone was laid in 1921 by Prince Arthur, Duke of Connaught and Strathearn, third son of Queen Victoria and an uncle to King George V. The Duke had significant ties to the Lutyens-designed city of New Delhi—the principal business center is named Connaught Place. The construction took ten years to complete.

The monument recognizes all of the fallen of the Indian Army in the period 1914 to 1921—some 82,000 in total—74,187 military and about 8,000 followers. Inscribed on the walls are the names of 13,216 missing men and women of the Indian Army who aren’t commemorated elsewhere. Some of these are British.

In 1971 the government of India decided to make the site the primary memorial to all of its fallen military personnel. It was renamed the "India Gate," not to be confused with the "Gateway to India," another relic of the British Raj, which is on the Mumbai  (Bombay) waterfront and isn’t a war monument. The CWGC no longer has responsibility for the upkeep, although there is still a Book of Names on the site. When I visited the gate in 1994 it was a quiet, deserted place that time had forgot, but after the Kargil War (1999) there was built under the arch the Amar Jawan Jyoti (the flame of the immortal soldier), a memorial conceptually similar to the French WWI Unknown Soldier resting beneath the Arc de Triomphe. There are actually four perpetual flames under the arch, guarded 24/7 by members of the Indian military, and there is also a flame on the top of the gate, but this is very rarely lit. The gate is floodlit for two and a half hours every night, and on special occasions the lights used are in the national colors of orange, white, and green. Now no traffic can ever pass under the gate, not even military parades.

The government intends to further develop the site with a National War Memorial for the dead of the wars since WWI and a National War Museum nearby. Both of these facilities will be mostly below ground level so as to not detract from the visual impact of the Gate.