World War One and the Decline of the British Empire 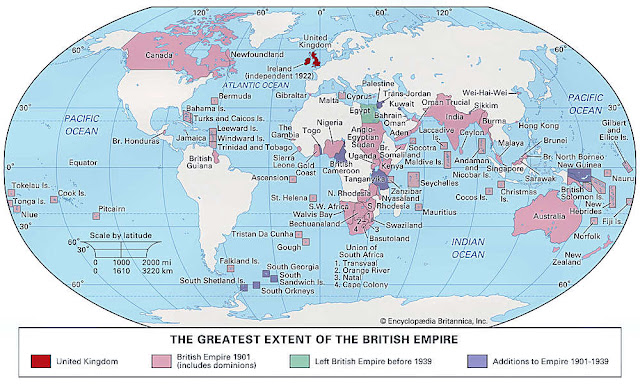 . . .At the beginning of the 20th century, the British Empire was an unopposed hyperpower (much as the United States has been since 1989). As historian Colin Cross observes: "In terms of influence it was the only world power." The British people and their leaders accepted this fact. In the early 1930s, Prime Minister Stanley Baldwin pronounced that "the British Empire stands firm, as a great force for good." Historian William Manchester argues that "most of the crown's subjects, abroad as well as at home, felt comfortable with imperialism."

But after the conclusion of the first World War, Britain's imperial psyche began to fracture. "After the survivors of the Western front came home," Manchester writes, "Britons wanted nothing more to do with war; most of them hoped never again to lay their eyes on an Englishman in uniform, and they were losing their taste for Empire." Winston Churchill despaired of this change. "The shadow of victory is disillusion," he noted. "The reaction from extreme effort is prostration. The aftermath even of successful war is long and bitter."

A deep desire to avoid conflict, even at the price of letting the Empire dissolve, permeated British society. In 1931, the House of Commons passed the Statute of Westminster, the first step toward independence for Britain's dominions. In 1932, a poll found that 10.4 million Britons supported England's unilateral disarmament, while only 870,000 opposed it. Historian Alistair Horne observes that, after World War I, it took just about 10 years for the "urge for national grandeur" to be replaced by "a deep longing simply to be left in peace."

Why did it all crumble? Several interrelated reasons—among them the grisly fact that England had lost virtually an entire generation of future leaders in the trenches of Europe. But another important cause was the waning of confidence on the part of liberal British elites, whose pacifism evolved into anti-patriotism.

In 1933, the Oxford Union—a debating society and one of the strongholds of liberal elite opinion—held a debate on the resolution "this House will in no circumstances fight for king and country." The resolution passed. Margot Asquith, one of England's leading liberal lights, wrote that same year, quite sincerely: "There is only one way of preserving peace in the world, and getting rid of your enemy, and that is to come to some sort of agreement with him. . . . The greatest enemy of mankind today is hate."

Churchill disdained the new liberalism, mocking one of his opponents as part of "that band of degenerate international intellectuals who regard the greatness of Britain and the stability and prosperity of the British Empire as a fatal obstacle. . . . " So deep was this liberal loathing of empire that even as the first shots of World War II were being fired, Churchill's private secretary, Jock Colville, witnessed at a theater "a group of bespectacled intellectuals" who, to his shock, "remain[ed] firmly seated while 'God Save the King' was played."

These elites could see evil only at home. The French intellectual Simone de Beauvoir did not believe that Germany was a "threat to peace," but instead worried that the "panic that the Right was spreading" would drag France, Britain, and the rest of Europe into war. Stafford Cripps, a liberal Labor member of Parliament, feared not Hitler, but Churchill. Cripps wrote that after Churchill became prime minister he would "then introduce fascist measures and there will be no more general elections."

In an important sense, the British Empire's strength failed because its elite liberal citizens stopped believing in it. . .

Note:  The original title of this piece was "Rule America?" I've deleted sections drawing parallel to America's situation today to concentrate on the British experience. MH