Suppression: The Real Role of Small Arms in Combat 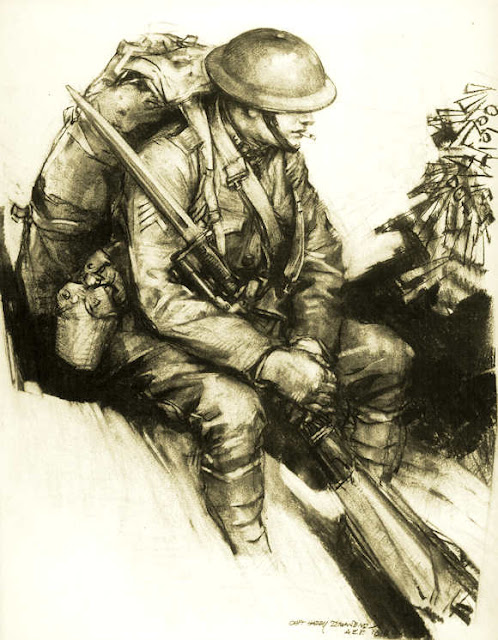 American Infantryman with His Rifle

Jim Storr is a retired army officer who now teaches at the UK’s Joint Services Command and Staff College and the Defence College of Management and Technology. In this article presented here in part  he considers the importance of suppression in the infantry battle, and the weapon effects, training and tactics that increase its effectiveness. His article does not mention the Great War specifically, but many of the lessons he discusses were certainly learned (or relearned) back then.

Since the Boer War, if not before, infantrymen have been unable to advance in the open against tolerably well-organised defences equipped with rifles. The attackers’ casualties are simply too great. The minimum requirement for a successful defence is quite modest: high-velocity, conoidal bullets fired from half-decent breech-loading rifles. Anything more, such as automatic weapons, simply makes the attackers’ job even harder. In the early part of the 20th Century different armies came up with different ways of overcoming that problem. Many involved artillery or tanks. Some involved infantry heavy weapons, such as mortars. Most included a form of organisation and tactics by which the attacker used small arms fire to suppress the enemy. That enabled the attackers to move forward to the point where they could use bayonets, grenades and very-short-range small arms fire (at ranges of perhaps a few feet) to incapacitate any defenders who continued to resist. Critically, however, there was never much rational, explicit analysis as to how that took place.

A few studies are quite insightful. It appears that a soldier’s ability to hit a given target is typically reduced by a factor of ten or so when he is moved from a static rifle range to a field firing area where he has to select cover, move, shoot and so on. It is reduced by a further factor of ten or so if there is an enemy firing back at him. It is reduced by another factor of ten if the enemy has machine guns, or if he has tanks; and by a hundred if he has both. We begin to see why many thousands of rounds can be fired, but very few actually hit.

Another study reveals entirely different phenomena. It highlights that achieving surprise, or inflicting shock on the enemy are hugely effective. These are more effective than any likely force ratio, or the use of other weapon systems, and so on. Put very simply, if the attacker can find the enemy’s flanks and rear and attack him from there, or apply sudden concentrated violence to him and then exploit it, the enemy will typically give up quite quickly. He will then either withdraw, if he can, or surrender. A number of issues interact here. One is that using covert routes to find the enemy’s flanks and rear is clearly a good thing. Another is that the use of tanks or indirect fire to stun the enemy is very helpful. But within all of those tactics there is another critical factor: the attacking infantry’s ability to suppress the defender. That enables the attacker to move forward: either to close quarters to use bayonets and grenades, or around and past the defender’s positions to attack him from unexpected directions.

Although relatively few of the enemy are typically incapacitated by small arms fire, their location and identity is often critical. For example, the clearance of one trench may allow the attacker to get behind several more, and start to roll up the position.

Suppression is the effect of small arms and other weapons systems which temporarily prevent the enemy firing its weapons or moving in the open. In simple terms, it makes them keep their heads down. It is critically important. In the offence it allows the attacker to move forward, to find gaps and weak points, and exploit them. In the defence it prevents the enemy moving forward and firing, and thereby sets him up for counterattacks. In both cases it pins the enemy down for incapacitation (or destruction) by other weapons.

For the last century or so most rifles have been more accurate than their riflemen. A typical rifle — be it bolt-action or semi-automatic — will form a group of perhaps 40mm or better at 100m, if fired from a vice or clamp. A reasonably well-trained soldier firing the same weapon on a range can group at perhaps 100mm at the same distance. Very few armies train their soldiers to consistently beat that sort of accuracy. This has a huge consequence, which very few armies acknowledge: the weapon is in many ways irrelevant. As most modern small arms are more accurate than their firer, it makes very little difference which weapon is selected. There are many other parameters. Reliability, weight and ergonomics are all important. But accuracy is almost irrelevant, because many weapons are ‘good enough’ in that regard.

What is far more important is to train the soldier to get the required effect from his small arms. In most armies he is trained to hit targets out to 300m or perhaps 600m. Yet in battle he rarely does that. He is rarely, if ever, trained to do what he really needs to do: suppress the enemy. Field research carried out in the Second World War provided a useful metric for small arms suppression, as did some more recent analysis. We can consider three cases: the need to suppress an enemy; the need to keep him suppressed; and the need to re-establish suppression once lost. In general, small arms fire has to pass within roughly a metre from the outline of the target to be effective. A small number of rounds passing through that area in a few seconds (perhaps 3 to 5 rounds in as many seconds) will suppress the target, or re-suppress him if required; whilst just one round every three seconds will keep him suppressed. That seems quite achievable.