The Delayed Action Rifles of Gallipoli

As winter approached, the Allied forces prospects for success at Gallipoli were effectively gone.  The deteriorating conditions, and the Ottomans’ growing strength, finally convinced the British to order the evacuation of Suvla and Anzac on 22 November. It would be a very risky venture, security of the highest level a necessity. British generals estimated that half the force would be lost in any attempt to withdraw because the Turks could not fail to notice as the trenches were so close. 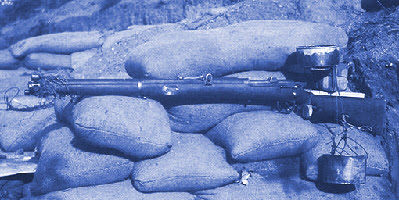 In order to give the impression that trenches were still manned, the Australians invented a delayed-action rifle. Mounted on the trench parapet, the rifle was fired by water dripping into a container on a long string attached to the trigger mechanism. The Diggers called these weapons "drip" or "pop offs." By rigging up dozens of these devices and varying the rate at which water dripped into the can, the Australians were able to simulate sniper fire over a period of several hours.

In the event, the Turks were so deceived that 80,000 men were evacuated with only about half a dozen casualties. The inventor of the rifles was Lance Corporal W.C. Scurry, who was awarded the Distinguished Conduct Medal and promoted to sergeant for his ingenuity and later commissioned.