Before the First World War the potential of aircraft for military purposes was not appreciated by the majority, but a few borrowed aeroplanes were used in the Army manoeuvres of 1910. These manoeuvres saw what is widely accepted as the first British military aeroplane reconnaissance flight. Despite criticism, the aeroplane was used for reconnaissance in the Army manoeuvres of 1912 and during the First World War, where it was to have every opportunity of proving its worth.

The first wartime aerial reconnaissance mission occurred shortly after the outbreak of the First World War, when two pilots of the Royal Flying Corps, Gilbert William Mapplebeck of 4 Squadron and Phillipe Joubert de la Ferte of 3 Squadron set out for a region of Belgium just south of Brussels on the 19th August. Both pilots made a record of this historic event in their diaries. Mapplebeck is clearly very enthusiastic about his task and records it in detail. 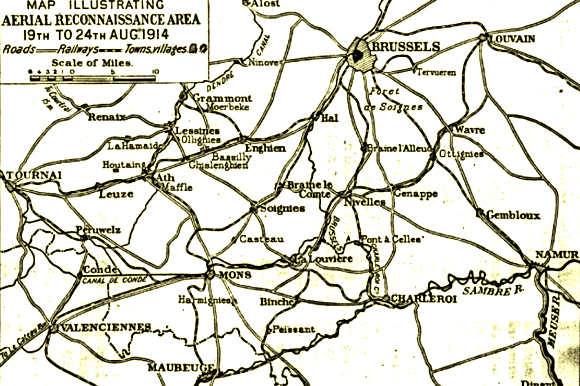 Mapplebeck – The night before last after dinner the Major told me I was to make a reconnaissance the next morning at about 9 o’clock. He told me that I was to reconnoitre Gembloux and to look out for large bodies of cavalry. Another machine was also going out probably a Bleriot of Number 3 Squadron to reconnoitre Braine l’Alleud and look out for the signs of the Belgian cavalry. I was tremendously pleased at this as it meant that I was making the first reconnaissance of the war, and am most grateful to the Major for selecting me. At 8 o’clock on the morning of the 19th August, I and my machine were both ready. At 8.15 Joubert (who was going in the Bleriot) and I were sent for by General Henderson, who told us each our particular jobs. Joubert was to go straight to Braine l’Alleud via Nivelles; I was to go to Gembloux near Namur. He was to be over friendly territory and look out for Belgians and I was to look out for advanced German cavalry. My special orders were to keep up with the Bleriot as far as Nivelles then both were to go off to our own districts.

Joubert’s diary entry is shorter and notes one of the major problems with aerial reconnaissance at the beginning of the First World War.

Joubert – First reconnaissance, with Mapplebeck. Lost myself most thoroughly. Landed at Tournai, where I had lunch with the governor and again at Courtrai, where I was taken for a German, until rescued by the Irish inhabitants. Finally achieved my task and returned after six and a quarter hours flying.

Mapplebeck also records his report of this reconnaissance in his diary.
Mapplebeck – Left Maubeuge 9.30am. Using large scale map, followed Bleriot. I did not pick up my position on the map, so depended on Bleriot’s pilot for correct route, intending to branch off on arriving at Nivelles. Missed Nivelles, arrived at a large town (I was at 3000 feet and in clouds) but could not place it on map. (On my return I discovered this to have been Brussels.) I flew to the other side of the town, turned round and steered South-South-East. I then took out the small scale map and picked up my position at Ottignies and soon found Gembloux after being in cloud. I made a wide circle round it, being in cloud part of the time, but only saw a small body of cavalry about a mile in length, moving faster than a walk in a
south easterly direction. At this time I was at 3400 feet and was just turning a little further south when I was enveloped in clouds. I flew on for about 300 feet out of the clouds and saw Namur. I then turned west and passed Charleroi and altered my course a little south. I missed Maubeuge, flew on for about 15 miles after realizing that I had missed it and landed at Wassigny at 11.30 am, and flew back, landing at Maubeuge at 12.00

This report of the first reconnaissance mission demonstrates that pilots had difficulty with navigation and only looked for specific pieces of information. The mission lacked something which would enable aircrew to record everything visible below them. There was no camera. The aircrew made sketches and annotated maps of the area with what they saw on the ground below. A difficult feat when flying at approximately seventy miles per hour in an open cockpit.

Captain Mapplebeck proceeded to have a very adventurous war. He was wounded during an aerial encounter, but after nine surgeries, returned to action three months later. He was later shot down behind enemy lines near Lille, escaped capture, and made it home to England through the Netherlands.  Then, his luck ran out when he crashed and died on a training flight in August 1915. On the other hand, Philip Bennet Joubert de la Ferté, KCB, CMG, DSO (21 May 1887–21 January 1965) was a senior commander in the Royal Air Force during the 1930s and the Second World War.