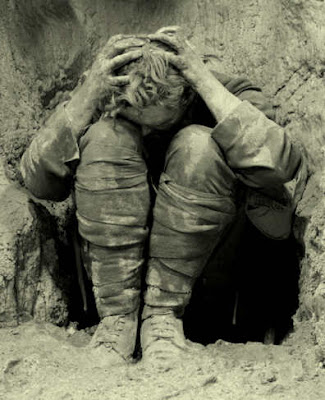 Wow!  This article is highly recommended.  Professor Edgar Jones is Professor in the History of Medicine and Psychiatry at King's College London. He has studied both conventional armed forces and terrorism, exploring how individuals cope during periods of intense stress and the impact of traumatic experiences on their wellbeing.   In 2006, he published this—highly readable for the layperson—article in which he discusses post-combat disorders from pre-WWI to the Middle East Wars of the 21st Century. His article has tremendous breadth and hundreds of interesting details about war, soldiers, and suffering I've never appreciated before.  Here is the abstract for his article.  The link to download the full ten-page paper (pdf document) follows.

Almost every major war in the last century involving western nations has seen combatants diagnosed with a form of post-combat disorder. Some took a psychological form (exhaustion, combat fatigue, combat stress reaction and post-traumatic stress disorder), while others were characterized by medically unexplained symptoms (soldier’s heart, effort syndrome, shell shock, non-ulcer dyspepsia, effects of Agent Orange and Gulf War Syndrome). Although many of these disorders have common symptoms, the explanations attached to them showed considerable diversity often reflected in the labels themselves. These causal hypotheses ranged from the effects of climate, compressive forces released by shell explosions, side effects of vaccinations, changes in diet, toxic effects of organophosphates, oil-well fires or depleted-uranium munitions. Military history suggests that these disorders, which coexisted in the civilian population, reflected popular health fears and emerged in the gaps left by the advance of medical science. While the current Iraq conflict has yet to produce a syndrome typified by medically unexplained symptoms, it is unlikely that we have seen the last of post-combat disorders as past experience suggests that they have the capacity to catch both military planners and doctors by surprise.