When Lebanon Came into Being

In November 1918, Britain and France declared their intention of establishing in Syria and Iraq “national governments drawing their authority from the initiative and free choice of the native populations.” By the Sykes-Picot Agreement of 1916, France was to be free to establish its administration in Lebanon and on the coast and to provide advice and assistance to whatever regime existed in the interior. In March 1920 a Syrian Congress meeting in Damascus elected Faisal king of a united Syria including Palestine; but in April the Allied Conference of San Remo decided that both should be placed under the new mandate system and that France should have the mandate for Syria. In June 1920 a French ultimatum demanding Syrian recognition of the mandate was followed by a French occupation and the expulsion in July of Faisal.

The mandate placed on France the responsibility of creating and controlling an administration, of developing the resources of the country, and of preparing it for self-government. A number of local governments were set up: one for the Al-Anariyyah Mountains region, where the majority belonged to the Alawite sect, one for the Jabal al-Duruz region, where most of the inhabitants were Druze, and eventually one for the rest of Syria, with its capital at Damascus. The French mandatory administration carried out much constructive work. Roads were built; town planning was carried out and urban amenities were improved; land tenure was reformed in some districts; and agriculture was encouraged, particularly in the fertile Al-Jazirah. The University of Damascus was established, with its teaching being mainly in Arabic. 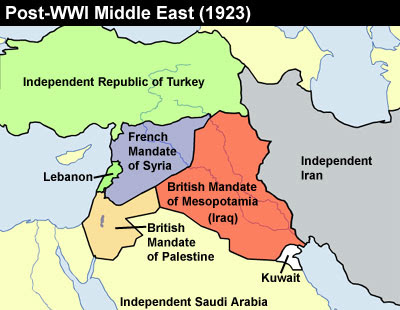 It was more difficult to prepare Syria for self-government because of the difference between French and Syrian concepts of what was implied. Most French officials and statesmen thought in terms of a long period of control. Further, they did not wish to hand over power to the Muslim majority in a way that might persuade their Christian protégés that they were giving up France’s traditional policy of protecting the Christians of the Levant.

The first crisis in Franco-Syrian relations came in 1925 when a revolt in Jabal Al-Droze, sparked by local grievances, led to an alliance between the Druze rebels and the nationalists of Damascus, newly organized in the People’s Party. For a time the rebels controlled much of the countryside. In October 1925, bands entered the city of Damascus itself, and this led to a two-day bombardment by the French (see Druze revolt). The revolt did not subside completely until 1927, but even before the end of 1925, the French had started a policy of conciliation.

The administration of the region under the French was carried out through a number of different governments and territories, including the Syrian Federation (1922–24), the State of Syria (1924–30) and the Syrian Republic (1930–1958), as well as smaller states: the State of Greater Lebanon, the Alawite State, and Jabal Druze State. Hatay was annexed by Turkey in 1939. The French mandate lasted until 1943, when two independent countries emerged, Syria and Lebanon. French troops completely left Syria and Lebanon in 1946.