The Sergeants of Blunden's "Pillbox"

In Edmund Blunden's "Pill Box" two sergeants he served with in the 11th Battalion of the Royal Sussex Regiment. are mentioned by name. My impression is that this a rare occurrence. 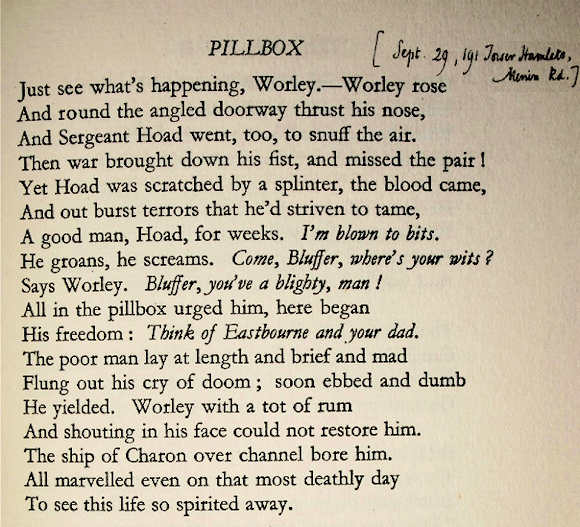 In the poem, one of the NCOs is fatally wounded and a second unsuccessfully urges his mate to fight through.  The wounded sergeant is Frank Albert Hoad of Eastbourne, who was killed in action 3 September 1916 somewhere along the Menin Road.  His friend was Sergeant Frank Worley, DCM, of Sussex, who continued to serve with the distinction and survived the war, albeit with a case of shell shock. Worley and Blunden remained lifetime friends.  On the occasion of his death in 1954 Blunden wrote a second poem in tribute to his friend.  About the same time he wrote another piece mentioning Worley and some additional sergeants whose actual existence I've not been able to confirm:  It's clear, Blunden, unlike some junior officers I've known, fully appreciated to dedication and critical role sergeants play in any military organization or operation.

Where are the sergeants, passed beyond?:

Great-hearted Worley of Worthing the pride,

My Wally Ashford astute and impartial

Seall of the runners, and Luck who plied

With the rations up through the wild night-tide.: