The Battle of St. Eloi Craters was fought from 27 March to 16 April 1916 during the First World War. The attack over the soggy terrain of Belgium was the first major engagement for the 2nd Canadian Division (see Canadian Expeditionary Force). It was a disaster for Canada and its Allies.

By late 1915, armies on both sides of the First World War were using extensive mining as a part of trench warfare. Sappers dug tunnels across the battlefield to plant explosives under enemy positions and would then retreat and blow them up. The fields near the Belgian village of St. Eloi, located five kilometers south of Ypres, were pockmarked with craters from repeated underground explosions.

Two Views of the Mine Craters 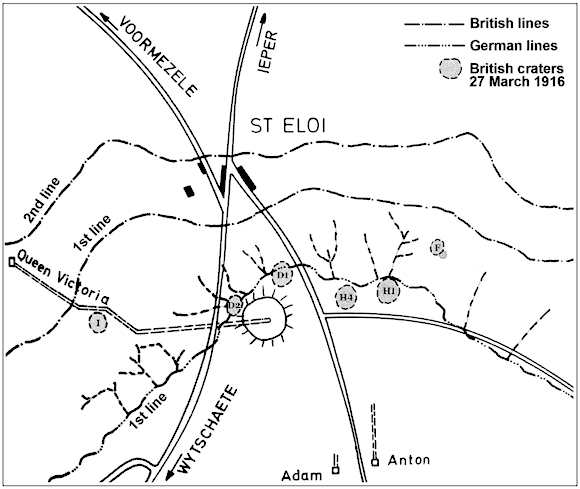 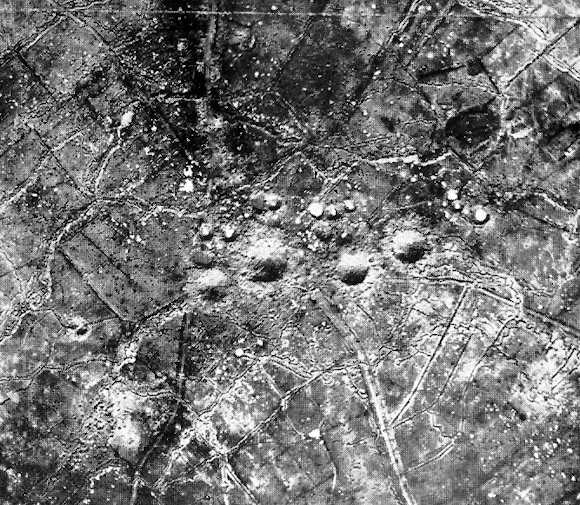 In the spring of 1916, the Canadian Corps’ 2nd Division was sent to fight Germans on the front line at St. Eloi. The Canadians were rushed to the battlefield, leaving no time to prepare for the attack. The plan was for the seasoned British troops to strike and then for the Canadians to take over and hold the line.

The fighting started at 4:15 a.m. on 27 March with heavy gun fire. Six British mines were set off one after the other, shaking the earth “like the sudden outburst of a volcano” and filling the sky with yellow smoke and debris, according to the Canadian Expeditionary Force's war record. The explosion was heard in England. German trenches collapsed.

The mines created huge craters in no man’s land. The British soldiers rose from their positions in the cold mud and attacked, quickly capturing three craters and the third German line. For several days, British soldiers fought hand-to-hand with Germans, advancing until 3 April.

The British soldiers grew confused as to where they were as the mines had reshaped the landscape. Four mines blew up so close to each other that the craters formed an impassable lake that was 15 m deep and 55 m across. (It later became a recreational fishing lake for a summer cottage).

British troops fought from inside the craters, crouching in mud or standing in waist-deep water, unable to sit. High winds, sleet, and mud created nightmarish conditions. Hundreds of men were killed on either side in a week of chaotic shooting and shelling. The exhausted British were relieved by the Canadians at 3 a.m. on 4 April.

The excited Canadians were eager for their first taste of battle. Arriving at St. Eloi, however, they found a shortage of steel helmets, machine guns and defensive positions. They had only a vague idea where they were and where the Germans were. The 2nd Canadian Pioneer Battalion improved the defences and attempted to drain the trenches of water. At the same time the entire front line came under constant bombardment on 4 and 5 April, and hundreds more men were killed.

Canadian Private Donald Fraser, a 34-year-old bank clerk from Calgary, described the scene: “When day broke, the sights that met our gaze were so horrible and ghastly that they beggar description. Heads, arms and legs were protruding from the mud at every yard and dear knows how many bodies the earth swallowed. Thirty corpses were at least showing in the crater and beneath its clayey waters other victims must be lying killed and drowned. A young, tall, slim English lieutenant lay stretched in death with a pleasant, peaceful look on his boyish face. Some mother’s son, gone to glory.”

Frank Maheux, another Canadian, wrote to his wife that “we were walking on dead soldiers” as they tried to advance. Wounded and traumatized men streamed back to the medical officers. Some had been fighting standing in cold water and mud for 48 straight hours, and officers had been awake for 100 hours.

At 3:30 a.m. on 6 April, two German battalions attacked down the ruins of the main road. The confused Canadian troops often lost communication with each other and were quickly pushed back. As the sun rose over the muddy wasteland, the Germans had recaptured all of the ground taken from them at the start of the battle.

The Canadians fought back with bombs but could not advance in the heavy rain. Troops attempting to recapture two craters got stuck in the mud and were shot dead before they could throw their grenades. A group of Canadians recaptured Craters 6 and 7, but thought they were in Craters 4 and 5. In the confusion they were cut off and left open to the German onslaught.

As night fell on 8 April, the Canadians again attacked but were stopped by German rifles and machine guns. Incessant rain made porridge of the battlefield. Germans attacked the next day but were likewise repelled. The Canadian leadership had little idea which craters they held and which were held by Germans. The leadership did not know what was happening at the front, as disoriented Canadians pinned down by artillery shells could not relay messages. Even the pigeons used to carry messages were dead.

Both sides shot at each other in the miserable conditions of the craters for another two weeks. More than 1,370 Canadians were killed or wounded, along with about 480 Germans. Aerial photography on 16 April finally showed the Canadians that they were in a terrible position, and the divisional headquarters ordered the battle stopped.

Still, the German attack continued with tear gas; the exhausted Canadians fought off the enemy again on 17 April. A German night raid through pounding rain drove the Canadians back further. Mud stopped Canadians guns from firing. Half of the remaining men in the craters surrendered to the Germans, and half crawled away. The Battle of St. Eloi’s Craters ended with the Germans in control of the battlefield, as they had been at its start.  St. Eloi's experience with mine warfare had not ended yet, however.  In June 1917 it would be the location of the largest mine exploded in the opening of the Battle of Messines.