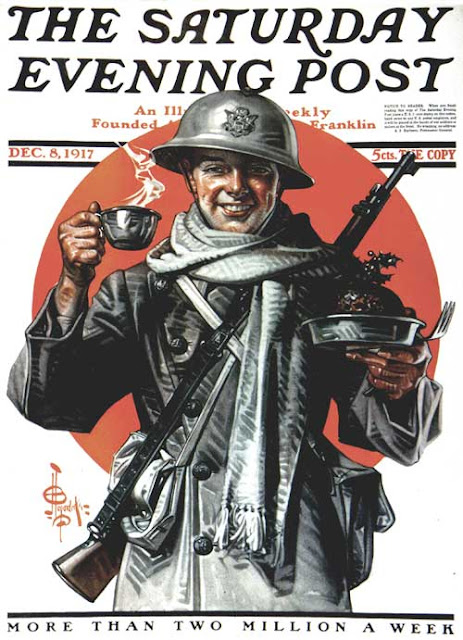 By the President of the United States:
a Proclamation

It has long been the honored custom of our people to turn in the fruitful autumn of the year in praise and thanksgiving to Almighty God for His many blessings and mercies to us as a nation. That custom we can follow now even in the midst of the tragedy of a world shaken by war and immeasurable disaster, in the midst of sorrow and great peril, because even amidst the darkness that has gathered about us we can see the great blessings God has bestowed upon us, blessings that are better than mere peace of mind and prosperity of enterprise.

Large-scale war broke out in Europe in 1914, but America maintained its neutrality for several years. After six American ships were sunk by German submarines, President Woodrow Wilson asked Congress to declare war on Germany. The first American troops reached France in June 1917. Over 2,000,000 American soldiers were sent to France before the end of the war in 1918 and nearly 2,000,000 more were in training at home for service abroad if needed.

During the First World War, special efforts were needed to feed five distinct groups: American troops stationed in the U.S., American troops abroad, the U.S. civilian "home front," European allied troops, and European civilians. Herbert Hoover was given sweeping power to set prices and to take measures against hoarding and profiteering. Americans were urged to save on sugar, wheat, fat, and meat. Civilian Thanksgiving recipes reflected this patriotic austerity, as pumpkin pies were sweetened with molasses and served with sugarless ice cream. 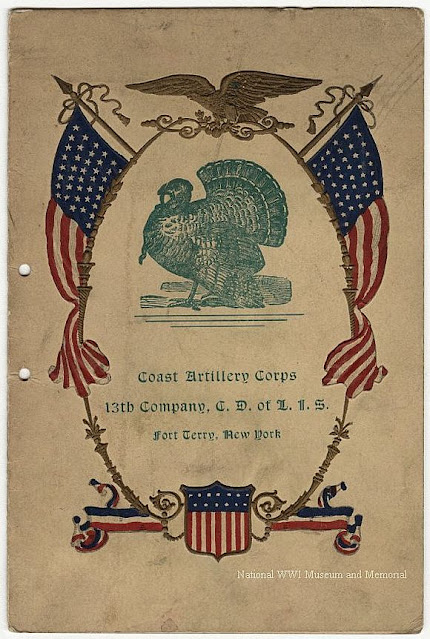 The "doughboy" diet now included a greater variety of food and a wider use of fresh foods, even in the field. The military’s ability to produce food and send it to the troops overseas was greatly improved.

American troops celebrated Thanksgiving at camps in the United States and overseas during the First World War. Soldiers and sailors from every region of America, men who often had little in common, gathered together to celebrate a unifying and patriotic holiday, a day that was uniquely American. This unifying theme was emphasized by the military Thanksgiving menu, a menu that centered almost entirely on "traditional" New England food. 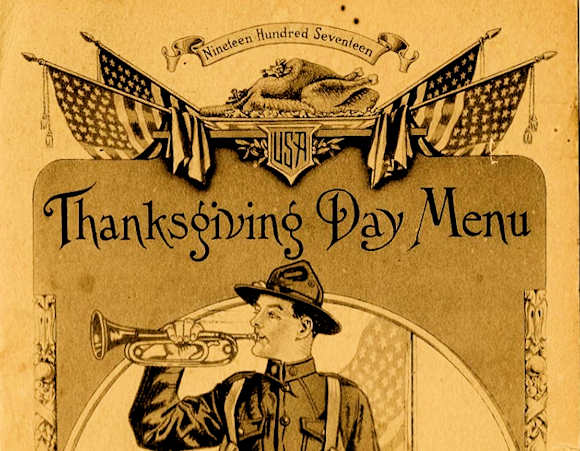 There was an appreciable upgrading of the standard overseas ration. Here was the (probably ideal) recipe for pumpkin pie filling that mess sergeants were expected to deliver.

Peel and clean the pumpkin; cut into pieces about 2 ounces each; pour 1 inch of water into a boiler, then put in the pumpkin. One inch of water will be sufficient, even though the boiler be filled with pumpkin, as pumpkin contains much water. Boil slowly until done, about 40 minutes. Then mash well, add the beaten eggs, sugar, milk, and spices, and mix well; make the pies without a top crust, and bake slowly. This recipe may be improved by the addition of a small amount of cream.