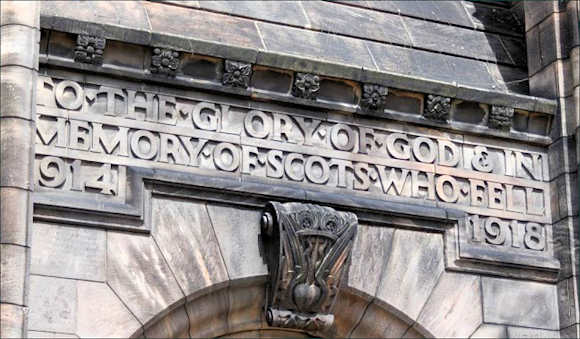 In 1917, although victory was still not assured, a number of people in Scotland were determined that those who had sacrificed their lives should be appropriately remembered and that their names should be permanently recorded and honoured in a National Memorial. The move was strongly supported by servicemen of all ranks who felt deeply the loss of their comrades.
It was clear however that the scale of the First World War was going to need new thinking on the subject of memorialization. Such thinking was already well advanced when, in 1917, the architect Edwin Lutyens came forward with his idea of "the Great War Stone," a permanent, non-denominational alter-like national stone which by its simplicity alone would convey the magnitude of loss. This stone was to become the world famous Cenotaph. It was decided that the war was also to be memorialized in the establishment of a National War Museum, later to become the Imperial War Museum, London. Alongside this, local museums were also to be established. As a focus of National and Imperial mourning it was logical that the Cenotaph and the National War Museum be located in the Imperial Capital, London.
A number of eminent Scots were also thinking along the same lines and while they strongly supported the concept of the London Cenotaph and National War Museum they also wanted a truly Scottish memorial, in Scotland, recording the names of all Scots and displaying Scottish material. The moving force behind this vision was John George 8th Duke of Atholl. A leading member of the Scottish aristocracy, the Duke of Atholl, or "Bardie" as he was known from his title, the Marquess of Tullibardine, was a serving soldier who had fought in the Sudan and had raised the Scottish Horse Yeomanry. He was a man of considerable vision and energy and, what was more important, he had both influence and connections.  By war's end, one in five Scots who enlisted during the First World War never came home.  Something must be done to honor Scotland's fallen, so there was tremendous support and momentum to build a memorial.
The Scottish National War Memorial at Edinburgh Castle honoring them was built during the 1920s, opening in 1927.  The castle's former North Barracks was altered to create this masterpiece.  The memorial stands on the site of the church of St Mary, which was used as a munitions store in the 1530s and torn down in 1755. It was made by some of Scotland’s finest artists and craftspeople. The exterior of the building has many examples of sculpture, showing figures including Peace, Justice, Mercy, Knowledge, Truth, and Courage. Inside, beautiful stained-glass windows, stone carvings and bronzes depict scenes from the First World War and honor the different roles played by men, women and animals in warfare. Sculpture and stained glass depict moving scenes from the First World War.  Animal figures portray the virtues and vices.
A centrally placed shrine in the shape of a casket holds the Rolls of Honor, lists of the fallen, "who was either a Scotsman (i.e. born in Scotland or who had a Scottish born father or Mother) or served in a Scottish Regiment and was killed or died (except as a result of suicide) as a result of a wound, injury or disease sustained (a) in a theatre of operations for which a medal has been or is awarded; or (b) whilst on duty in aid of the Civil Power."  Following the Second World War a further 50,000 names were added to the Rolls of Honor. At this time it was decided to leave the memorial unchanged as a masterpiece of Scottish architecture and craftsmanship and no Second World War Battle Honors were added to the regimental bays. And it thus remains, a memorial to all who have died since 1914.  Even today names from the First World War and other conflicts are still being added.