"I MAY BE UNINSPIRING, BUT I'LL BE DAMNED IF I'M ALIEN." 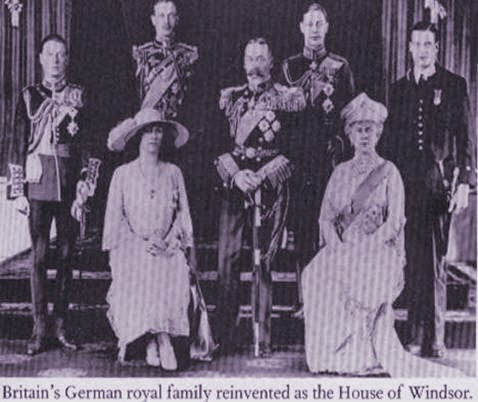 
Today in 1917 the British royal family changed its surname to Windsor from Saxe-Coburg-Gotha.
The intertwining of the European royal families at the outbreak of war linked just about every one of them to Queen Victoria through her numerous progeny. Her grandchildren were consorts or rulers in five of the combatant countries — Russia, Germany, Rumania, Greece, and Great Britain — and numerous other princes and aristocrats throughout Europe were closely related. This proved especially difficult for the Empress of Russia (née a princess of Hesse-Darmstadt), who, in spite of her neuroses, was always a devout Russian patriot and had a true loathing for the Kaiser, her cousin. She became a natural target for discontent with the regime for this reason of her national origin alone.

Anti-German virulence in Great Britain had its own sad story, with long-naturalized German (or perceived as German) shopkeepers and tradesmen hounded from business and even dachshunds being attacked and vilified. Not a shining moment for a country defending liberty on the Continent. The British royal family itself bore a German name — Saxe [Sachsen]-Coburg-Gotha — the legacy of the marriage of Queen Victoria and Prince Albert of Saxe-Coburg-Gotha in 1840. Of course, the royal family was “German” well before the surname became a triple threat; the Hanoverians became British sovereigns in the early 18th century when the last Protestant descendant of the Stuart dynasty died childless (Queen Anne) and the succession jumped sideways to the Protestant Hanoverian descendants of Elizabeth of Bohemia, daughter of King James I of Great Britain.

George V and his queen, Mary of Teck, ruled Great Britain during the Great War and were faced personally with the increasing anti-German atmosphere. By 1917 it was clear that a strong message had to be proclaimed as to the patriotism of his court and family, and after some internal debate, the king’s private secretary Lord Stamfordham came up with “Windsor”, after the ancient English royal residence used since the 12th century — a stroke of marketing brilliance. In addition, Queen Mary’s family name was changed to Cambridge (and Athlone) and the Battenbergs (who joined the family through Queen Victoria’s daughter Princess Beatrice’s marriage) became the illustrious Mountbattens.
[Note that upon the birth in June 1894 of the future Edward VIII/Duke of Windsor, Queen Victoria wrote to the baby's father, the future George V, that "this will be the Coburg line, like formerly the Plantegenet, the Tudor,...Stewart (sic), & the Brunswicks," always promoting the legacy of Prince Albert. Not to be.]*


One Battenberg suffered this xenophobia particularly strongly. Prince Louis of Battenberg was a German-born prince but also a naturalized British subject and career British naval officer who rose to the rank of First Sea Lord in 1912. His wife was a granddaughter of Queen Victoria. But anti-German pressure early in the war pushed him to resign his post — a blow to the dedicated officer — and in 1917 he became the 1st Marquess of Milford Haven, relinquishing all German titles as well. His son, Lord Louis Mountbatten, became Viscount Mountbatten of Burma, and, among other things, the last viceroy of India as well as the granduncle and mentor of the present Prince of Wales. He vindicated his father's resignation as First Sea Lord by acquiring the post himself from 1954 to 1959.

In spite of all this maneuvering to substantiate public Englishness for the royals, George V himself could not have lived or acted more English, as he himself alludes to in his response to Mr. Wells’s assessment. He was the epitome of the stolid English family man; he loved his career in the Royal Navy and would have been content to remain there in relative obscurity had his older brother Prince Arthur not died and catapulted George into the direct succession. He had no problem with being uninspiring. Alien, however, was deeply unjust.