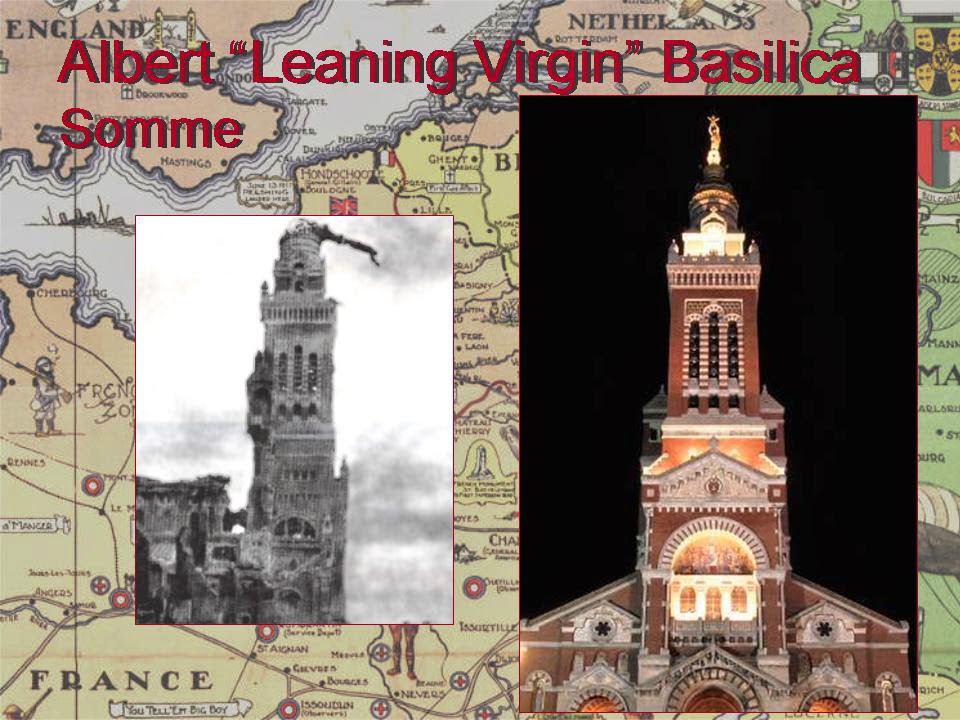 A key destination for any tour of the Somme battlefields, Albert is a small town in the Province of Picardy. It found itself in the heart of some of the hottest action on the Western Front throughout the Great War. Unfortunately, Albert had one target that towered over the village making it an excellent observation post for whoever occupied it and an irresistible target for opposing gunners. Earlier town fathers, attempting to turn the community into a destination for Christian pilgrims, had built an impressive Romanesque basilica crowned with a gilded statue of the Virgin Mary holding up her baby son to God. The Virgin also appears to be lame, an apparent message of the power of prayer for the handicapped.

During the early days of the war, German artillery had shelled the basilica, trying to knock it down and prevent the French artillery spotters from using it. They only succeeded in dislodging the statue of Mary, which by 1916 hung at a precarious angle just below the horizontal. This was just too visible and too heavenly connected for the soldiers passing through the town. The Legend of the Leaning [or Hanging] Virgin was born.

The British rendition was that whoever knocked her down would lose the war, the Germans apparently believing the opposite. Another version of the legend had it that the fall of the Virgin would signal the end of the war. The details of the various versions seem secondary to the belief by troops of all sides that the Virgin's natural descent was halted temporarily by a divine hand so its final destruction could mark the war's end. It must have provided a double psychic reassurance that the forces of Heaven had taken an interest in protecting the Virgin and her Child and would eventually take steps to end the suffering on the battlefield.

Interestingly, the man most responsible for finally knocking down the Leaning Virgin survived the war and shared his tale many years later:

I have read with great interest Mr. Harvey's article [in Air Pictorial magazine]. . .On page 136 there is a picture of Albert Cathedral as it stood in 1917, and Mr. Harvey makes a note that legend had it that the monument's fall would herald the end of the war.

In 1918 I was on the staff of the 5th Corps, Heavy Artillery, and an Army Order had been issued that no more buildings were to be demolished by gunfire. One early morning we had a telephone message from the Infantry Colonel of the Battalion holding the line quite near to the Cathedral to the effect that he was suffering heavy loss from machine gun-fire from the Cathedral Tower, and he asked that we should blow the place to blazes. My General was out on reconnaissance work, and my Brigade Major was absent at the time so I (quite a young Captain) was in charge. Realizing the Army Order and knowing that I should get no satisfaction from Army H.Q., I chose one of the 8-in. Batteries in the Corps, worked out some imaginary trenches well beyond the Cathedral, and then ordered the Major of this Battery to fire a couple of hundred rounds at these imaginary trenches, knowing full well that the line of fire would go clean through the Cathedral!

The Major was thrilled with this order and it was duly carried out and the Cathedral Tower and most of the surrounding Cathedral was blown to hell, thus probably saving the lives of many of our Infantry.
F. G. Petch, M.C., Vice-President of the Air League, London, E.C.2.

This succinct background summary is quoted in part from the website: THE LIFE AND TIMES OF A HERO: The Battle of the Somme from the Letters of William George Ashby Bentley, 2nd Hampshires.

Incidentally, beneath the basilica is an outstanding subterranean museum that contains a wonderful collection of authentic artifacts and weaponry from the fighting and tells the moving story of a little village that found itself in the middle of one of history's great battlefields.