A World War I Polish-American Cemetery in Canada 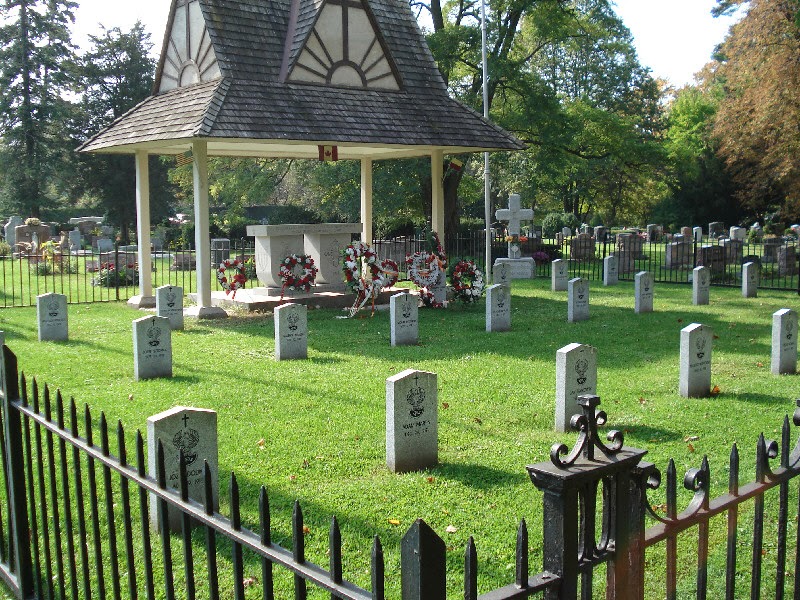 In the small Ontario, Canada, town of Niagara-on-the-Lake (population 12,500 or so but with lots of tourists in the summer months) there is a cemetery with a small section bounded by a wrought iron fence and featuring three tall poles flying large Canadian, American, and Polish flags. A bronze plaque contains the following information (abridged and edited): This burial plot commemorates the Polish soldiers who trained in this community from 1917 to 1919 at Camp Kosciuszko and subsequently made the supreme sacrifice. They personified the Polish soldier's motto:"For your freedom and ours!"

As a result of the movement to regain the independence of Poland and policy differences with the United States, 22,174 volunteers of Polish descent crossed the Niagara River from Youngstown, NY, to this community and joined 221 Polish-Canadians for military training from 1917 to 1919. They were trained by Canadian officers and outfitted and financed by France. As a result, they wore French uniforms and hence were called the "Blue Army." In Europe the volunteers were assigned to the Fourth French Army in battalion and regimental groups and participated on the Western Front in the Champagne sector of France in 1918. In October 1918 the battalion and regimental groups were united to form a separate Polish army, which with additional volunteers totaled 80,000. At the end of World War I, the soldiers were transported across Germany to defend the new-found independence of Poland and repel the Bolshevik invasions. At this burial plot rest 25 of 41 soldiers who were stricken and died of influenza while in training.