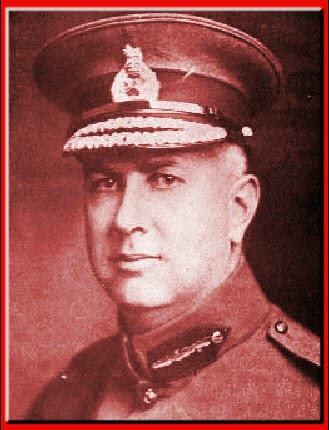 From Articles by Joyce Kennedy and Michael Iavarone


A former militia volunteer, Arthur Currie [b. 1875] advanced through ability and force of personality to become the senior Canadian officer of the Great War. After surviving with distinction as a brigade and division commander, he was ready for more responsibility. Currie was an advocate of intense planning and preparation before going into battle — "Thorough preparation must lead to success. Neglect nothing." Canadian Corps Commander Sir Julian Byng let him apply his theories, placing him in charge of the training and preparations for the assault on Vimy Ridge. After that great success he succeeded Byng in command and subsequently led his troops in the conclusion of the Third Battle of Ypres [Passchendaele] and a string of victories commencing at Amiens in August 1918.

Knighted after his accomplishments at Vimy Ridge, Arthur Currie became Canada's first full general in 1919. He then served as Principal and Vice Chancellor of McGill University until his death in 1933.


"... it is quite time that some corps commanders were told to go to blazes."

"I am a good enough Canadian to believe, if my experience justifies me in believing, that Canadians are best served by Canadians."

"We have shown that even in trench warfare it is possible to mystify and mislead the enemy."

"Thorough preparation must lead to success. Neglect nothing."

Address to Canadian Corps, March 1918:
"To those who fall I say: You will not die but step into immortality. Your mothers will not lament your fate but will be proud to have borne such sons. Your names will be revered forever and ever by your grateful country, and God will take you unto Himself."