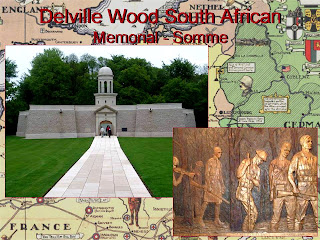 Delville Wood was a tract of woodland, nearly one kilometer square, the western edge of which touched the village of Longueval, 11 km east of Albert in the Somme sector. On 14 July 1916 the greater part of Longueval village was taken by the 9th (Scottish) Division and on the 15th, the South African Brigade of that division captured most of Delville Wood. The wood now formed a salient in the line, with Waterlot Farm and Mons Wood on the south flank still in German hands, and, owing to the height of the trees, no close artillery support was possible for defense.

The three South African battalions fought continuously for six days and suffered heavy casualties. On 18 July they were forced back, and on the evening of the 20th the survivors, a mere handful of men, were relieved. On 27 July, the 2nd Division retook the wood and held it until 4 August when the 17th Division took it over. On 18 and 25 August it was finally cleared of all German resistance by the 14th (Light) Division. The wood was then held until the end of April 1918 when it was lost during the German advance, but  it was retaken by the 38th (Welsh) Division on the following 28 August.

Commemorating the efforts of the South African Brigade is a multi-part memorial, which is a candidate for the most beautiful such complex in the world. Most important is the wood itself, where many of the fallen from the war still lie. After the battle a single tree was left standing in the wood, and that tree is marked and part of a visit to the site. At the entrance is an archway (not shown) that has a statue of mythological figures Castor and Pollux and a war horse that was completed in 1926. A magnificent five-pointed museum was dedicated in the 1980s and honors the South African sacrifice in both World Wars and the Korean conflict. Field Marshal Jan Smuts, a significant figure in South Africa's history, has a significant display in the museum.

See our full story of the battle for Delville Wood by Clicking Here.