SMS Goeben (left below) was the second of two Moltke-class battlecruisers of the Imperial German Navy, launched in 1911 and named after the German Franco-Prussian War veteran General August Karl von Goeben. Several months after her commissioning in 1912, Goeben, with the light cruiser Breslau (right ship in photo), formed the German Mediterranean Division and patrolled there during the Balkan Wars. 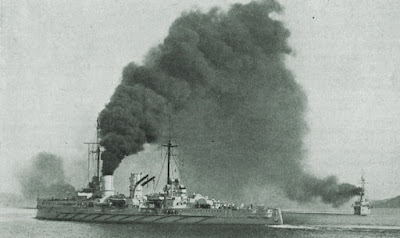 After the outbreak of World War I on 28 July 1914, Goeben and Breslau under the command of Admiral Wilhelm Souchon evaded British naval forces in the Mediterranean and reached Constantinople. When the German embassy was informed of the arrival of the Goeben and the Breslau, Ambassador Baron Hans von Wangenheim persuaded the Turks to allow the ships to enter the harbor. Once Souchon's ships were safely in the harbor, the German diplomat reminded the Turks that Great Britain had recently broken a contract to supply two new battleships to the Turkish government. The British Admiralty, nervous about the threat of a European war, had decided to keep the new warships for its own use instead of transferring them to Turkey. The Germans now offered to provide the Turks with the ships they needed by selling them Goeben and Breslau. After several hours of negotiation, the Turks agreed to purchase the German ships.

The two ships were transferred to the Ottoman Empire on 16 August 1914, and Goeben became the flagship of the Ottoman navy as Yavuz Sultan Selim. On 30 October 1914, Turkey officially joined the war on the German side, substantially won over by the acquisition of the powerful German warships. The decision by the Young Turks to join the hostilities radically shifted the dynamics of the war and had an earthshaking impact on Middle East, which is still being felt in the 21st century. Yavuz Sultan Selim remained the flagship of the Turkish navy until she was decommissioned in 1950.

Adapted from Trenches on the Web and Wikipedia articles.