The Unforgettable Monument at Mort Homme 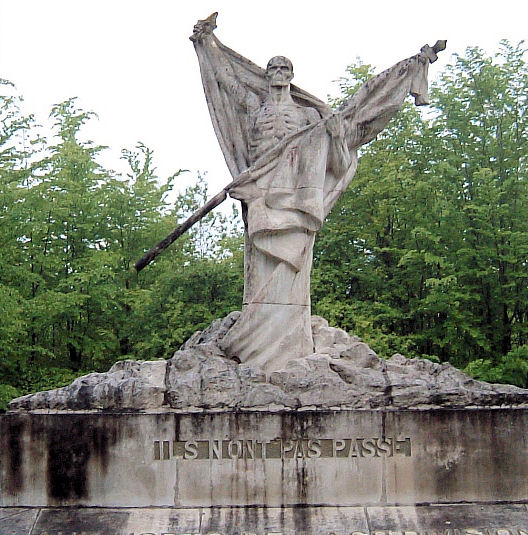 The famous Mort Homme "Skeleton Memorial" commemorates those of the French 69th Division, who bore the brunt of much of the fighting during the critical period. The monument, by Froment-Meurice, was unveiled in 1922. It bears the famous words Ils N'ont Pas Passe ("They Did Not Pass") in response to the rallying cry Ils Ne Passeront Pas! ("They Shall Not Pass!) of General Robert Nivelle's Order of the Day for 23 June 1916.

Atop Mort Homme is also a memorial to the men of the French 40th Division, in the form of a tall obelisk with a sword engraved on the front and the words Mort Homme inscribed on the top. There is no commemorative for the thousands of Germans who also fell on the hill.

After three months of ferocious fighting, Mort Homme was secured by German forces on 29 May 1916. The hill was the site of further back and forth action after the official end of the Battle of Verdun.  French forces finally secured the hill on 20 August 1917.  A year later it would be immediately behind the jump-off line for the American Meuse-Argonne Offensive. During the 1916 fighting, American Field Service ambulances had helped evacuate wounded from the Mort Homme and Cote 304 sector on the left bank.