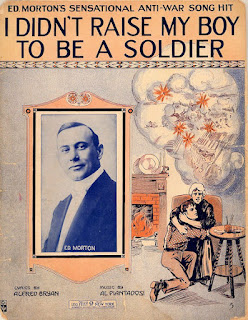 In 1915, a new song produced by Tin Pan Alley in New York City swept through the U.S. and could be heard in every music hall and front parlor with an upright piano. "I Didn't Raise My Boy to Be a Soldier" expressed the popular beliefs of pacifism and isolation from the European War of the moment. Less than two years later, in 1917, a new song took America by storm. It was called "Let's All Be Americans Now" and was written by a Jewish immigrant from Russia named Irving Berlin. The lyrics pled the case for support of the Allied cause and appealed to new Americans with the lines: "…now is the time, To fall in line, You swore that you would so be true to your vow, Let's all be Americans now." Nowhere did these words resonate more significantly than in New York City.

As Ross Wilson, the author of this outstanding study, explains, New York City was a city of immigrants. Thus, it epitomized the struggle Americans of various ethnic and cultural backgrounds faced as war raged in Europe. Comprised of dozens of distinct neighborhoods with their own ethnic associations, institutions, and newspapers, New York City's transformation to a relatively cohesive patriotic unit was neither smooth nor swift. Suppression of free speech, political corruption, and violence as well as the formation of civic loyalty groups and mass activities, all contributed to this process.


In addition, New York City represented to the rest of the nation all that was suspicious. How could you trust a landscape that was in such flux, inhabited by hundreds of thousands of migrants from every destitute corner of Europe? They were Jews and Catholics, Serbians and Italians. They spoke other languages, dressed in native garb, and brought "strange" ideas like socialism with them from a morally bankrupted Europe. Were they really Americans? And most importantly, would they "fall in line" as the song implored? If the citizens of New York City could embrace loyalty to America's interests, so could the rest of the nation.

The author is a senior lecturer at the University of Chichester in Great Britain. His study breaks new ground in a number of ways. Urban history of World War I has concentrated on European cities that were either in the middle of or close to military action. The metropolis was as much a victim of total war as the forest of the Argonne. But a study of New York City gives us the opportunity to look at the war experience as it was played out in the public spaces and private homes of citizens far from battle. As Wilson explained, "…this is not a study of the city as the war raged on some faraway battlefields: this is a study of the city at war."


The book is divided into six chapters tracing the ideological transformation of the "immigrant" city into an "American" city from 1914 on. The author looks at the formation and activities of dozens of relief organizations and defense societies. He examines the efforts of the city's elites as well as food rioters. He sees the Liberty Loan campaigns and the institution of the draft as altering the city  not only ideologically but also physically. Perhaps most noticeable were changes at the end of the war when public spaces such as streets and squares were renamed to commemorate local servicemen and over 100 memorials were placed all through the five boroughs.


From the viewpoints of urban and World War I history, this is a path-breaking book. The research is top notch. The historiography essay in the introductory chapter and the bibliography are well worth perusal. But this is not a book for the casual reader—rather it will attract the serious scholar. Part of the Ashgate Studies in First World War History, the book is seriously expensive. However, this historical study will attract an appreciative audience.