Yamamoto in the Great War 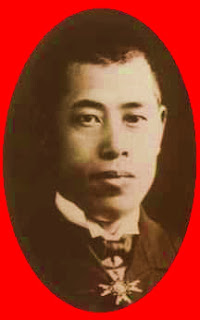 Isoroku Yamamoto (1884–1943), Japan's great admiral-to-be, was certainly well positioned and of the right age to play a major role in his nation's World War I effort. He was a wounded veteran of the great victory at Tsushima, and he had already been moved onto the fast track to high command by his superiors.

However, the outbreak of war in 1914 found him at the naval staff college where he was required to complete the curriculum before returning to full-time service. After his graduation in 1916, Yamamoto, now a lt. commander, was assigned to the staff of the 2nd Battle Squadron.

Nothing of great military moment apparently occupied him during the period leading up to the Armistice. His biographers concentrate on two other personal matters during this period. He was adopted at this time into the distinguished Yamamoto clan (his original surname was Takano) and he was married. Postwar he would have two well-documented extended assignments to the homeland of his future American adversaries, as a student at Harvard University and, later, as two-time naval attaché to Washington.