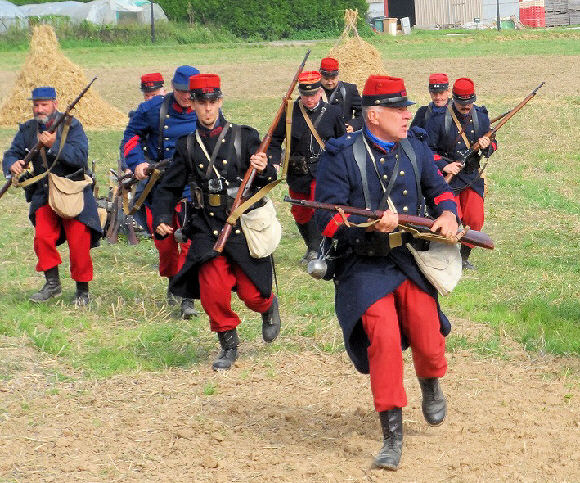 French infantry had been wearing distinctive red trousers back to 1829, under the reign of Charles X. The model of 1867, modified in minor ways up to 1887, was  what the troops wore in August 1914. The soldiers certainly looked grand on the march, with the dark blue coat (capote) making for a dramatic contrast. Soliders love wearing distinctive uniforms (ask any Marine), and even on the eve of the Great War one minister said, "The red trousers are France!” Several prewar military developments, however, doomed many of the men wearing the rouge pantaloons in the war's early battles. Rifles and machine guns had longer ranges and smokeless powder improved battlefield visibility. The Frenchmen were just too easy to see and to hit for the Germans.

The horrendous casualties of the opening battles doomed the flashy uniforms. While many remember the awful first day of the Somme for the British Army, few remember that on 22 August 1914 the French Army took even greater casualties. By the end of the month plans were under way to replace the soldiers' uniforms with the horizon blue uniform shown below. Ironically, the more subdued kit became an even greater source of pride for the Poilus.