Lest We Forget: The Man with a Donkey

In 2008, John Simpson Kirkpatrick, the man with the donkey and one of the most enduring of all Anzac legends, was denied the ultimate recognition of courage and sacrifice — the Victoria Cross. In the early fighting at Gallipoli Private Simpson was killed ferrying wounded soldiers to safety from the front line.

Although his commanding officer, Lieutenant-Colonel Alfred Sutton, recommended him for the country's highest military award, the Defence Honours and Awards Tribunal disqualified Simpson from being posthumously awarded the medal. That is because his bravery was not supported by the required documentation: the sworn statements of at least three witnesses to his actions.

Witness accounts of Simpson's deeds exist, but they are mostly unspecific diary accounts of his journeys from battlefield to dressing station. Simpson was fatally wounded in the chest by Turkish gunfire on the morning of 19 May 1915,and was buried at 6:30 that evening at Hell Spit, on the southern end of Anzac Cove.

The day after Simpson's death, Colonel John Monash, then the commander of the Australian Imperial Force's 4th Infantry Brigade at Gallipoli, sent a submission to Australian and New Zealand Divisional Headquarters. Monash (later General Sir John) wrote: "I desire to bring under special notice, for favor of transmission to the proper authority, the case of Private Simpson…(who) has been working in this valley since 26th April, in collecting wounded, and carrying them to dressing stations." 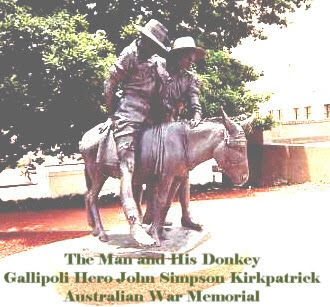 Sutton, the commanding officer of the 3rd Australian Field Ambulance, who had tied his own Red Cross armband around Simpson's donkey, wrote in his diary on 1 June 1915: "I think we will get a VC for poor Simpson."

Simpson's feats have immortalized him in the minds of Australians, but he will apparently never receive the honor his commander sought for him.