A Belgian-American Wartime Friendship Recalled Due to Recent Events


As we recover from the shock of the terror in Belgium and send our thoughts and prayers their way, I am reminded of the incredible connection I recently made with one of their own over a poem written nearly 100 years ago.

I have been working on the letters of my great-aunt Marion Otis Mitchell sent from the back of the front from 1917 to 1918 for over a year now and created a website to share my progress with whoever may be interested. Just over a month ago, I got an email through the website from a Jacques Van Melle, who said he had found our site, MitchellSisters.com after searching for Marion Mitchell. He said:


I am the grandson of Georges Van Melle (1888–1944) Belgian soldier at the 9 ième régiment de ligne of the Belgian army and poet (poète-soldat) at the front near the river the Yser (in Flanders Fields). He went regularly to Nancy to visit his brother Joseph Van Melle who was during the war a publisher of books for the Belgian government.


Marion translated a poem of Georges's, "La mort Rode," around September 1918. It could be translated as "Death seeketh whom he may devour". This translation that I do not possess was strongly appreciated by Georges in his letters to his brother. Is it possible for you to confirm this is really the woman my grandfather met and is there a trace of him in writings of Miss Mitchell, and possibly do you possess the manuscript of the famous translation of his poem? It would be very important for me to know if I'm right and I would be very grateful if you could react to this mail.

I had seen Joseph Van Melle (1884–1970) director of Berger-Levrault, a publishing house in Nancy, France, mentioned in some of Marion’s letters and in fact Marion translated a guidebook to Nancy for Joseph towards the end of the war, of which I have a copy. I went to the scrapbooks I inherited from Marion and found not only pictures of the Van Melles but also a typed transcription of the poem that Georges so liked and that Jacques had been searching for.


Thank you very much for these unique documents. I didn't know Marion translated some other poems and writings of my grandfather such as Nuits d'hiver (Winter Nights) which is in my view his most patriotic poem, "apparition" is a beautiful hymn addressed to the Belgian soldier and homing thoughts (la pensée du retour) was the reality of these soldiers during four long years; their parents and loved ones lived in occupied Belgium only some 50 kilometers from the trenches but they did not see each other for four long years.

Marion wrote on the top of this clipping:

“Geo. Van Melle is “our” Van Melle’s brother. I am translating a long poem by him, which I am going to send to the Atlantic if it is good enough. The original is splendid. “ 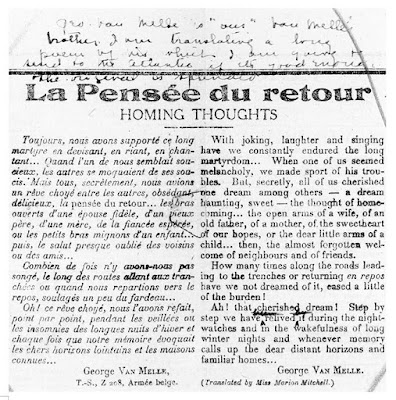 Georges was certainly not an adorer of the war, he was influenced by Romain Roland the great pacifist author and this you can read in La mort Rôde so well translated by Marion as "Death is abroad" but more intensely in some other poems like "le tourment dominical" (not publicized during the war…too dangerous...). Georges died during the second war in 1944 due to the permanent illness (cardiac problems) directly caused by the very hard conditions at the Yser front in the winter of 1915 and 1916. He left his wife with 5 young children...


In correspondence with Jacques a couple of days ago, after making sure he and his family were safe, Jacques responded with this:

This barbarism shows we have to fight every day for keeping our values of tolerance, democracy, values our grandparents always kept in mind even during la Grande Guerre. . .

This project of finding ways to share the story of my grandmother and great-aunt in France during the Great War has been an amazing journey and has brought me many new friends united by what happened one hundred years ago. I look forward to the next serendipitous connection and discovery.

The photos of Georges Van Melle in uniform and with his brother are courtesy of Jacques Van Melle. Other photos are from the Mitchell Sisters collection.

An American Woman's WWI Journal: At the Back of the Front — Marion Otis Mitchell
Editors: Alexa Gregory and Vicki Rondeau