I found the chart below at the website of the National Museum of American History (part of the vast Smithsonian collection).  Other than for some mathematical shortcomings, it says a lot about American society in 1917 and 1918.  Camp Lewis, Washington, the largest cantonment in the western states, trained men for the 13th, 40th, 91st Divisions, and several other formations and specialties. As you can see below, 88,000 men were mustered in at the Camp. This image caught my eye since a number of my relatives passed through Camp Lewis and are included in the statistics. 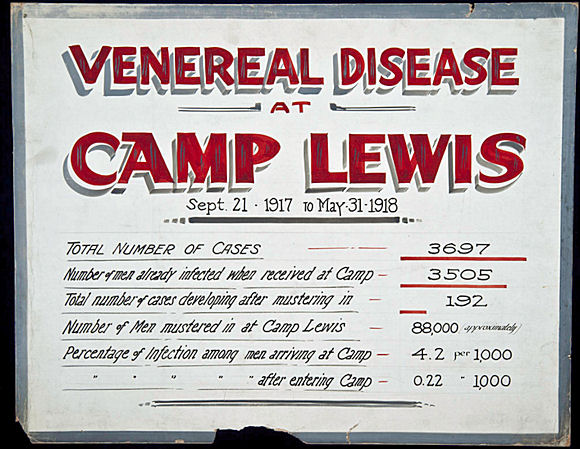 Recall now that these men had been passed medically for induction before arriving at the camp. So the 88,000 new soldiers represent a cross section of the fittest young males of the nation. From a 21st-century perspective, its report of an infection rate of .42 percent (incorrectly stated on the chart) from venereal disease (gonorrhea and syphilis) is shocking.

Then, I thought, "Just a minute, we are living in a post-sexual revolution time in history. Maybe the statistics of 100 years ago are not out of alignment with today's less sexually inhibited population."  So, I looked up the pertinent statistics from the Center for Disease Control.

Ignoring patients with a double diagnosis, this gives a composite figure of 516.7 cases per 100,000 males  or a 0.52 percent infected rate. Comparing our 2014 population to the Camp Lewis group, it appears that young men then were roughly 8 times more likely to be carrying what we now call sexually transmitted diseases.

What can we gather from this? Even after allowing for the post-AIDS "Safe Sex" campaigns, the figures for 1917–18 are still shockingly high. There was an apparently unknown epidemic, a monumental public health problem in America, because surely if the healthiest and fittest segment of the population was so afflicted, it suggests similar trends in the general population

I wonder if this would have been discovered if the need had not arisen to induct and medically examine millions of young Americans into the military.