Recommended: "Into the Trenches: The U.S. Army Artists of WWI"


The National Museum of the United States Army has put together a remarkable display of their official art from the Great War.  Some pieces on display have seen considerable circulation, but some I've seen for the first time, including one of gas victims as moving as Sargent's famous painting at the Imperial War Museum.

Here is one action-oriented piece from the collection, by my favorite of the eight official U.S. Army artists, George Matthews Harding — 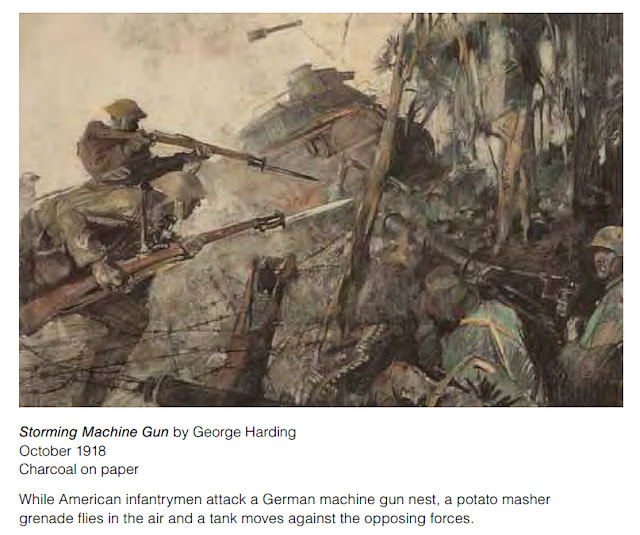 In this charcoal sketch of the fighting during the Meuse-Argonne Offensive, American infantrymen, supported by a light tank, storm a German machine gun nest at bayonet point. A German potato masher grenade flies overhead, attesting to the ferocity of the hand-to-hand fight. The artist George Harding recalled, “…there is little chance of studying the subject beforehand. If an attack is scheduled, it happens rain or shine, night or day…to know his material, the war artist puts on a steel helmet, his gas mask, his trench boots, his trench coat and laden with only a sketch book, a couple of pencils and some emergency rations in his pockets, like any soldier present, he takes his chances…”

View All the Collection: