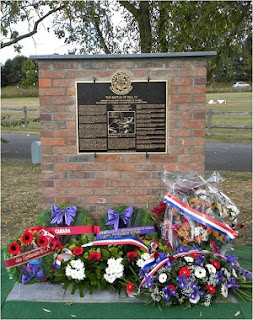 My spring 2015 battlefield tour had a great visit to the battlefields around Loos, the location of brutal fighting a century earlier. However, we were all quite disappointed to discover that the site of the 1917 victory by the Canadian Corps under Arthur Currie at nearby Hill 70 was hard to find and marked with the inadequate, unit-level memorial shown on the left. About the battle: following the victory at Vimy Ridge in the springtime, the Canadians continued operations in the Arras area to divert attention from the French front, and to conceal from the Germans the planned offensive in Flanders. In the Battle of Hill 70, August 15–25, Canadian forces captured this strategic position on the northern approach to the city of Lens and secured the western part of the city. The fighting here cost the Canadian Corps 9,198 casualties. However, considerable ground was gained and enormous casualties inflicted on the Germans by skillful use of machine guns and the creation of deliberate "killing grounds" across which the Germans would have to counterattack. The battle also hampered enemy plans to send fresh troops to Flanders.

Now for the good news. Canadians and local citizens, including the leaders of the excellent Loos Battlefield Museum, have succeeded in gaining approval of the new memorial shown below, conceptually.  It should be completed in time to make the 100th anniversary of the battle in August 2017. 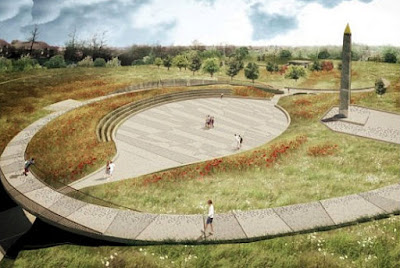