Serbia and the Balkan Front, 1914
reviewed by Ron Drees

Serbia and the Balkan Front, 1914:
The Outbreak of the Great War
by James Lyon
Bloomsbury Academic, 2015

The assassination of the Archduke and those responsible, the war between Austro-Hungary and Serbia, and an analysis of the military decisions are the three, albeit unequal, sections of this book. The most informative section may be the first, as Lyon discusses the conspiratorial Black Hand organization, who its members were, and the Serbian government's role in the assassination. Political assassinations were common in post-1900 Europe, which explains why the Archduke's murder was not considered alarming at first. Surprisingly, the assassin Princip is still today a national hero.


Lyon carefully discusses the background of this war, which amounted to the third Balkan war in three years, and the devastating effect the prior wars had on Serbia, especially its army. Serbia had shortages of all kinds, including ammunition, rifles, shells and boots. There were no uniforms for the peasants whose trousers had no pockets so they carried both their rifles and ammunition in their hands. However, the Serbian Army did not lack for determination among its soldiers and sound military planning by its leaders. By contrast Austria-Hungary was fully equipped, but its leadership by Conrad and Potiorek was fatally flawed. This background information prior to the Great War may be the chief value of the book. 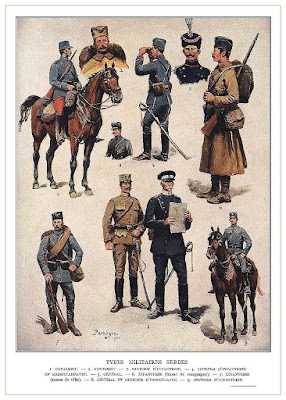 In contrast to A Mad Catastrophe by Geoffrey Wawro, Lyon does not refer to the ethnic diversity of the Austro-Hungarian empire which resulted in officers unable to communicate with the ranks, nor does he admit that the empire had a shortage of military equipment or other kinds of unpreparedness. Instead, he states that the empire never had a lack of ammunition or shells, just a long supply route that caused problems.

The empire and the nation hated each other with an incredible ferociousness. Descriptions of the atrocities are phenomenally gruesome while the combat descriptions are greatly detailed. More maps would have improved the reader's understanding but the front lines were so fluid that this was not so feasible. The war was fought to a near standstill until Serbia ran out of ammunition, food, men, and morale. The empire then pushed the Serbs back until there was no hope. Finally artillery shells arrived from the Allies, successful attacks reinvigorated the little country, and the pendulum swung back to victory in late 1914.


The analysis section of Serbia and the Balkan Front tallies up the losses. The conflict claimed over 50,000 lives on both sides but this was dwarfed by 160,000 typhus deaths in Serbia, exceeding American fatalities in the Great War and Korea combined. Lyon goes on to explain the failures of the empire's military plans and the significance of this combat to the Allies on both the Eastern and Western fronts. The war recessed in this corner of Europe until October 1915 when matters again went very badly. The final peace of 1918 did not benefit Serbia. This episode of war was just one more event in centuries of continuing hatred which expressed itself again in the 1990s. No end in sight.