The Order of the White Feather 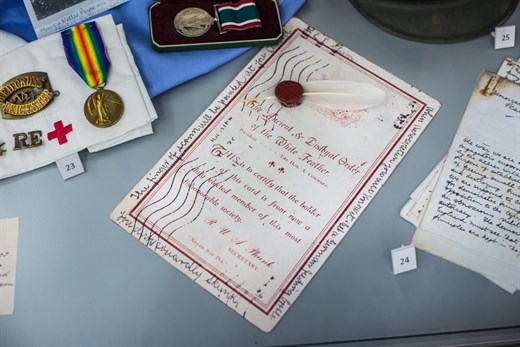 This is a replica of a "certificate" from the so called "Ancient and Disloyal Order of the White Feather." Some patriotic women felt that young and able men who had not enlisted to fight were cowards and hoped to shame them into action by handing them a white feather as a symbol of cowardice. In fact, many of those who were not fighting were medically unfit, working in essential occupations, had fought and been discharged with injuries that were not obvious, and so on. Many conscientious objectors did serve as stretcher bearers and medics rather than fight.

The words handwritten around the edge of this "certificate" read

You dirty cowardly skunk. When heroes return you will know it. The finger of scorn will be pointed at you coward.