Part III: The Service and Death of Arthur "Clifford" Kimber,

Bearer of the First Flag

Although he left from Palo Alto and the San Francisco Bay Area as a Stanford volunteer, Arthur "Clifford" Kimber was not a native of California. The family had only moved west from New York eight years before when his father, a clergyman, died suddenly in the summer of 1909. It had been a terrible loss for a still young family: for his widow Clara, more than 20 years his junior, and for his three sons John, Clifford, and George. At 13, Clifford was the middle child. The Rev. Arthur Kimber had been a dynamic and inspiring figure, not just to a family who looked to him for his love and support but to a large body of parishioners in downtown New York.

Thousands of men and women, many of them recent immigrants to the United States, flocked to his mission church in Manhattan's Lower East Side. He was the vicar of St. Augustine's, an Episcopal church in the city's Bowery, an area which acted as a magnet for the city's dispossessed or newly hopeful. St. Augustine's offered spiritual, and a good deal of practical, support on the way to a new life. The mission was an offshoot of Trinity Church on Broadway and Wall Street, the main Episcopal church of New York and by comparison to St. Augustine's possibly the wealthiest parish in the United States. Kimber senior had been appointed in 1872 to head up this new offshoot, something he devoted himself to over the following 35 years. But it was another aspect of Kimber's ministry, his social activism, which brought him into contact with New York's public authorities along the way, working with them to try to find practical as well as religious solutions to the city's problems.

During the mid-1890s he worked through the city's Police Board, cooperating with Theodore Roosevelt, then Police Commissioner for the city in a campaign to curtail the city's drinking hours. That was before the young Arthur Clifford had even been born, yet pride in the memory of his father's work and his common cause with Roosevelt fired the young Kimber in his teenage years.

By the time Kimber was growing up in California, Roosevelt had already reached and departed the political summit, yet the former president remained young Kimber's political hero. It was no accident, therefore, that he sought out Roosevelt before he set out for Europe in 1917, anxious to receive some words of wisdom from the great man. Later still, and in France the following year, Kimber was just as pleased to have trained as a pilot alongside Roosevelt's youngest son, Quentin — "QR" — whom he described in his letters home as "a pretty good sport [who] has lots of life [and] is absolutely democratic and very well liked".

But whatever political allegiances passed down by his father, or indeed any more personal or moral qualities he instilled in his middle son, there was another more practical inheritance which young Clifford was gifted by the Rev. Kimber — an interest in gadgetry and machines. That gadgetry included the latest form of transport then being pioneered, aviation. In spite of his clerical training and background, Arthur Kimber was a man who also thought and taught with his hands — practical life skills to parishioners, as well as busying himself in his workshop at home with all manner of mechanical projects and inventions. Clifford was an avid student and helper in all his workshop activity. In time, in 1907/08, he and his elder brother spent a year at a school in Canterbury in England, and it was after their spell there that the Rev. Kimber took his two older boys for a holiday in continental Europe. There, on 8 August 1908 in France, the three were in the crowd at a horse-racing track at Hunaudières near Le Mans to witness Wilbur Wright making the first official public demonstration of his Wright Model A aircraft, the flying machine he and his brother Orville had designed. It was a flyaway, runaway success. It wowed the crowds and Clifford Kimber was hooked.

After his father's death the following year he and his brothers — now relocated to California — found solace in aping the exploits of Wright, taking to the hills near the various homesteads where they lived, to build and fly gliders. They formed a little club and poured what money they earned locally into the materials needed to build the gliders, with the rather more daring Clifford acting as chief architect and pilot, even if all was not plain sailing. There were mishaps on the way, failed attempts which reduced the carefully assembled wooden constructs to firewood. His mother, Clara, in a memoir many years later, recalled her son taking off in one especially large glider and flying it from Cragmont in the Berkeley Hills, crashing further down the slopes. He emerged largely unscathed, if $10 the worse off, but at least one San Francisco newspaper jumped the gun to publish untimely — and erroneous — accounts of his death.


It was that flying bug which inspired him years later to apply for a posting to the nascent U.S. Air Service in France. Within a matter of weeks of joining the ambulance corps he had written to Edmund Gros, a San Franciscan of French heritage who was the medical director of the American Field Service. Gros, a physician, managed to combine his medical duties for the American Ambulance with a different role — that of the de facto organizer of early American aviation efforts in France. It was he who had helped create the Lafayette Escadrille, the original unit of American pilots who flew with the French air service from 1916, and the "Lafayette Flying Corps," the later American foreign legionnaires who would fly with a variety of other French squadrons. Ambulance volunteer Kimber wanted to be part of Gros's plans and to play an active combat role in the war and thus wrote to him in Paris. After some negotiation and medicals Kimber was accepted in September 1917 for the American air arm proper, now beginning to be pieced together.

Clifford Kimber spent the next year in aviation service, the first six months in training over the winter of 1917/18. It was an exacting schedule of first basic, and then advanced training schools, finally being tutored at a third camp in aerial gunnery techniques. Yet delays afterward — delays in transporting a vast force of men and materiel to Europe as well as the wrangling still going on as to the American Expeditionary Force's exact role and theater of operations — saw him frustratedly having to cool his heels for a time. He then acted as a "ferryman," delivering warplanes around France from distribution depots and airfields.
But finally it was time for active service as Kimber went into combat with both the French Air Service — Escadrille Spa. 85 — and the U.S. Air Service's 22nd Aero Squadron, seeing action across the front in northeastern France in the summer and early autumn of 1918. Kimber fought with the 22nd during the Americans' St. Mihiel campaign, narrowly escaping with his life in an attack by enemy fighters. Acting as his patrol's rear guard, he was jumped by a group of Fokker aircraft and his plane riddled with gunfire. "Unreasonably shot to pieces" in the restrained words of the squadron's official historian, Arthur Raymond Brooks. 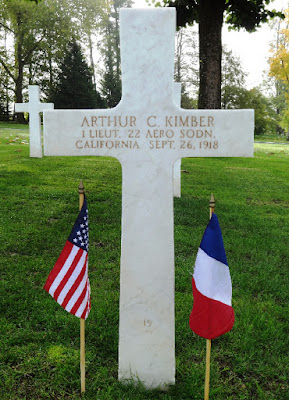 Yet less than two weeks later Kimber's luck ran out. It was late in the morning of 26 September 1918, the opening morning of the Meuse-Argonne campaign, when the young lieutenant led a patrol to strafe roads to the north of the German Kriemhilde Stellung battle-lines. Descending from the clouds on an enemy gun battery in the village of Bantheville, his SPAD XIII fighter was hit by a shell from the ground. The plane exploded and Kimber fell to his death. The moment was witnessed by the fellow members of his patrol who saw the remnants of the aircraft plunge to the ground, yet his body was not recovered at the end of the war.

It took another three years for that to happen, before his body was finally identified in an unmarked grave in the village. A year after that in the summer of 1922, 1st Lieutenant Arthur Clifford Kimber was finally reinterred in an official plot, only a matter of miles from where he had fallen. His grave can today be found toward the back of the American military cemetery at Romagne-sous-Montfaucon, in one of the final rows of the last plot. An early volunteer for the war in France, he came to be one of the last buried there.