Countdown to America’s Entry into the Great War

It was America’s declaration of war on Germany on 6 April 1917 that transformed the Great War into a true world war. For 31 months neutral America had been watching Europe’s great powers pulverizing each other. Now America was joining that battle. Here is a countdown of events and policies that brought America onto Europe’s battlefields:

4 August 1914 Just hours after the war’s outbreak, President Woodrow Wilson in a proclamation to the nation declares “a strict and impartial neutrality” for America. He forbade Americans to “take part, directly or indirectly” in the war. Two weeks later, in a message to the Senate, he added that the U.S. “must be neutral in fact as well as in name.” Neutrality was almost universally popular, backed by 878 of the nation’s 897 major newspapers. One of 1915’s most popular songs was “I Didn’t Raise My Boy to Be a Soldier.” 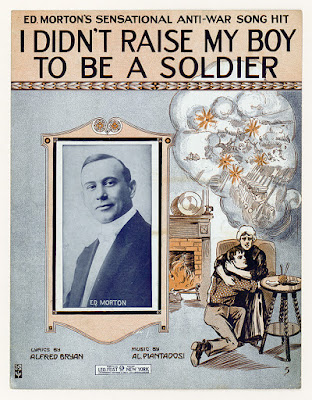 Early August 1914 Britain cuts the two trans-Atlantic telegraph cables linking America to Germany, thus giving London almost total control of all news reaching the U.S. from Europe. Tight British censorship kept from American readers reporting critical of the Allies or sympathetic to Germany. Meanwhile, through its War Propaganda Board, Britain launched what became an unprecedented massive propaganda campaign in the U.S. aimed at bringing America into the war by portraying Germans as barbaric Huns and aggressors.

October 1914 onward America begins extending credit to Britain, France and Russia, allowing them to purchase American war materiél, food, and other goods. Though Germany too was eligible for credit, it received almost none, since Britain’s near-total warship blockade stopped American ships from reaching German ports (even though, as a neutral, the U.S. had legal and traditional rights to trade with all nations). The booming trade between America and the Allies ignited a huge demand for the output of America’s farms and factories and for the financing to pay for that output. As these sectors became increasingly dependent on sales and loans to the Allies, they became a huge and powerful interest group in Washington and across the nation pushing to help the Allies.

7 May 1915 German U-boat U-20, firing a single torpedo, sinks the ocean liner RMS Lusitania, drowning 1,198 passengers, including 128 Americans. This was widely denounced in the U.S. as an outrage and a confirmation of the British assertion that Germany was a criminal nation that had to be defeated. The sinking reinforced in the public mind the view that the German submarine was a barbaric weapon, going far beyond warfare’s accepted rules by allowing an unseen foe to attack without warning.

13 May 1915 Britain’s Bryce Commission, headed by James Bryce, Britain’s former very popular ambassador to the U.S., releases its report (in 30 languages) accusing German soldiers of committing obnoxious atrocities in Belgium and France. The report cited, among other incidents, the crucifixion of a Canadian soldier, decapitations of war prisoners, gang rape, sexual mutilation of Belgian and French women, and the bayoneting of Belgian infants. This report, writes historian Thomas Knock, “created a sensation [in the U.S.] Germany would never fully recover from the revulsion that swept the U.S.” (In the postwar years, historians fully discredited the Bryce Report, finding that it was almost entirely propaganda and was based on concocted evidence and fabrications.)

8 June 1915 William Jennings Bryan resigns as secretary of state, protesting that Wilson’s extremely tough response to Germany over the Lusitania sinking was unfairly one-sided because it ignored Britain’s similar violation of international law by its blockade keeping American and other neutral ships from Germany. Jennings had been the Wilson cabinet’s most fervent and committed champion of neutrality; he was replaced at the State Department by strongly pro-Allies Robert Lansing. Reflecting Lansing’s views is his September 1916 diary entry that America should “join the Allies as soon as possible and crush the German Autocrats.”

August 1915 The Preparedness Movement bursts into public awareness as the press extensively covers the 1,300 New York businessmen, professionals, and notables who descended on the town of Plattsburgh, New York, for five weeks of grueling military-like training to prepare themselves for possible military service. By spring 1916, scores of similar “camps” for middle-class men had popped up across the nation, while parades, rallies, and other events warned the public that America was woefully unprepared for war. Reinforcing this tale of military vulnerability were a host of best-selling books (such as America Fallen and Defenseless America) and blockbuster (silent) movies ("The Battle Cry of Peace"). Though taking no sides in Europe’s Great War, the Preparedness Movement got Americans thinking seriously that their nation ultimately may go to war.

July 1916 London blacklists 87 American firms, violating their rights to commerce under international law. Congress and the press demanded that Wilson take action against Britain to defend America’s freedom of the seas and its right, as a neutral, to trade with anyone. But he did nothing, tacitly acquiescing to the British blockade. By contrast, demonstrating America’s increasing tilt away from neutrality, Wilson continued to insist that Germany abide strictly by international law.

31 January 1917 Germany notifies the U.S. that, on the following day, its U-boat commanders have orders to attack all ships in the war zone around Britain and France as retaliation against the Royal Navy’s blockade of Germany. Three days later, Wilson breaks diplomatic relations with Germany. With their new battle orders, the U-boats began patrolling the high seas for Allied ships and in the war zone for all ships. Within days, an American merchantman was sunk; by mid-March three more were torpedoed.

March 1917 The collapse of Romanov rule in Russia makes it politically  easier for Wilson to support the Allies, removing from the Allied camp the repressive tsarist regime that was extremely strongly opposed by such key American constituencies as liberals, Progressives, Jews, Poles, and other East and Central European immigrant groups.

2 April 1917 Woodrow Wilson asks a special session of Congress to send him, for his signature, a declaration of war against Germany. In his address, widely regarded by many historians as one of the great presidential orations, strangely missing was any litany of alleged wrongs committed by Germany against America to warrant America’s going to war. All he could point to, and did repeatedly, was a single German action: the violation of American neutrality by the U-boats. Instead of justifying war as a way to stop Germany from allegedly harming America (and to punish Germany for that), Wilson described his call for war as an opportunity to improve the world by, introducing a phrase that became one of the most famous in American history, making “the world safe for democracy.”

6 April 1917 The House of Representatives votes 373 to 50 for war against Germany, following a Senate vote two days earlier of 82 to 6. A messenger then sped this joint declaration down Pennsylvania Avenue to the White House, where Wilson, at 1:18 p.m., signed it. Immediately a Navy lieutenant ran out onto the White House lawn and by hand waves sent a prearranged message to another officer waiting across the street at a Navy Department window. At once, the signal was relayed to every U.S. Navy ship and shore installation: “W...A...R.”

Our contributor, Burton Yale Pines, is the author of the award-winning:
America’s Greatest Blunder: The Fateful Decision to Enter World War One

Learn more about it at: