By the Way — Let's Not Forget Salonika Either

The Salonika policy. . .was largely vindicated by the extremely practical test of results.
Winston Churchill, The World Crisis

Regular readers might recall that I recently got on my soap box about the Italian Front and the need to keep studying it. I just remembered that I did a similar piece about the Salonika Front a few years ago for our monthly newsletter, the St. Mihiel Trip-Wire.  Here it is. 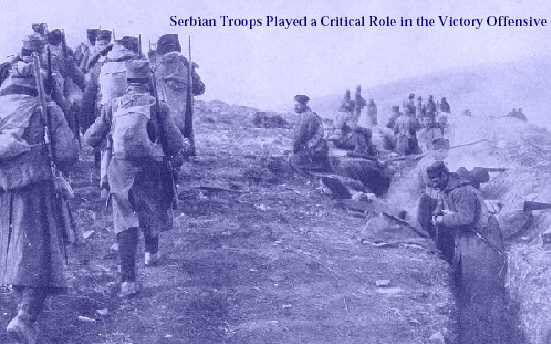 The Salonika, or Macedonian, Front is mostly neglected today, except by specialists and the British-based Salonika Campaign Society. But consider: almost all the war's combatants sent forces to the theater; three quarters of a million men were deployed along its 170-mile front; even down to the 21st century it remains the greatest focal point of debate between the war's "Easterners" and "Westerners","and in fact,it was the front where the final collapse of the Central Powers began.

Anglo-French forces began landing at the Greek port of Salonika on 5 October 1915. The troops were sent to provide military assistance to the Serbs, who were threatened by combined German, Austro-Hungarian, and Bulgarian armies. The intervention came too late to save Serbia, and after a brief winter campaign in severe weather conditions on the Serbian frontier, the Anglo-French forces found themselves driven back to a small perimeter around Salonika. At this point the British advised that the troops be withdrawn.

However, the French, with Russian, Italian, and Serbian backing, still believed something of strategic importance could be gained in the Balkans, and, eventually, the British also bought in to the policy.. After preparing the port of Salonika for defense, the troops moved up-country. During 1916, further Allied contingents of Serbian, Italian, and Russian troops arrived, and offensive operations began. These culminated in the fall of Monastir to Franco-Serbian forces during November. A second offensive during the spring of 1917 made little impression on the Bulgarian defenses. The front line remained more or less static until September 1918, when a third offensive was launched under the command of talented French General Louis Franchet d'Espèrey. With a breakthrough by Serbian forces west of the Vardar river, the Bulgarian Army was forced into a general retreat. The campaign concluded with the surrender of Bulgaria on 30 September 1918. Backdoors to both Austria-Hungary and Turkey were now open.