The Last of the Ebb: The Battle of the Aisne, 1918
reviewed by Terrence J. Finnegan

The Last of the Ebb: The Battle of the Aisne, 1918
by Sidney Rogerson

(The book includes an introduction by Malcolm Brown and a chapter titled "The German Side" by Generalmajor A.D. von Unruh, Chief of the General Staff, 4. Reserve Korps .)
MBI Publishing, 2007. First published in 1937

Sidney Rogerson was a staff officer in the Worcester Regiment, 23rd Brigade of the British Army's 8th Division in 1918. Rogerson titled his book The Last of the Ebb to reflect the last receding of a British-held sector in the war, where the "ebb for one side implies the top of the tide for the other." His work mentions the confusion of working with the French, be it the inability to communicate due to language, application of strategy, and tactics for defense, as well as the lack of awareness of German intentions, partly due to inadequate French aerial reconnaissance of the German advance. His self-described job was a sort of "dogsbody" taking the place of anyone who went on leave to working whatever was not specifically covered by his fellow staff officers.

After suffering from an arduous campaign on the Somme front that spring, four British divisions, including 8th Division, were relocated to a "quiet sector" near Reims in the Champagne region. The sector was known by the Germans as "the sanatorium of the West." This was in accordance with Général Foch's roulement plan to rest tired divisions in order to build up the Allied general reserve. The four British divisions now were under command of Général Denis Duchêne, French 6 Armée. Unfortunately for the British, the German Crown Prince Wilhelm's Army Group committed 7 Armée to Operation Blücher, attacking across the Chemin des Dames, pushing to the Aisne river. The brilliant Oberstleutnant Bruchmüller prepared the German artillery for the 27 May 1918 attack. MG (ret.) David Zabecki described Bruchmüller's preparation for Operation Blücher as "another masterpiece of secrecy and operational security." Rogerson recalled, "Within a second a thousand guns roared out their iron hurricane . . .It was a descent into hell." Not only did the initial massive two hours and 40-minute barrage put the Allied defenders into a state of shock from high explosive, also vast quantities of Blaukreuz (diphenylchlorarsin) ["sneezing gas"] made the entire front a total hell. Generalmajor A.D. von Unruh recalled, "The enemy had no time to resist,"

Rogerson writes of the confusion experienced by the British defenders that first day of the offensive to the French strategy of holding the sector. "Our gallant allies, however, knew best." Such as what was experienced by the U.S. 26th "Yankee" Division at Seicheprey in April 1918, the newly arrived British forces were put forward into the closest battle lines to No Man's Land, known as Position 1. The end result was a similar fate to the "sacrifice positions" of Seicheprey. By the end of 27 May German Stosstruppen had advanced 22 kilometers, the largest single-day advance of any attack in World War I.

On 28 May OHL objectives for Operation Blücher changed from a diversion to draw forces from Flanders and the Somme to a decisive battle on the Western Front. Supreme Allied commander Général Foch saw that Operation Blücher was not going to lead to any decisive operational results. He recognized it as a feint designed to draw off Allied reserves, however. Strategic reserves from Flanders or Somme sectors did not head south to Champagne.

Perhaps the most gripping description by Rogerson was of the heroic action on the third day of Operation Blücher by Brigadier-General W.G. St. G. Grogan, Worcester Regiment, 23rd Brigade, 8th Division. In order to steel the courage of his men while under heavy fire from artillery, Minenwerfer, and machine guns, Grogan was seen riding "in full view of the enemy, talking and joking with the men as he passed." His risk was deliberately to hold the line as best the 23rd Regiment could achieve with the major losses suffered. At one point, Grogan charged advancing Stosstruppen "cocking a snook" [thumbed his nose] at an infantryman about ready to fire his rifle. Grogan's horse took the bullet in the nose and Grogan dismounted and coolly bandaged the beast with his own handkerchief.

Grogan's counterattack so inspired the troops that the German advance party fled back down the hill. Two months later Brigadier-General Grogan received the Victoria Cross from King George V. Brigadier-General Grogan replied to Rogerson's congratulations, "as a personal remembrance of the very strenuous and I hope cheery times which we passed together on the Aisne and the Marne."

By the end of the third day the German advance showed no signs of ceasing, but they slowed down to feast on the spoils of war. At Fismes, Generalmajor A.D. von Unruh recalled, "There were enormous quantities of tinned food and preserves of all descriptions which our soldiers looked on as delicacies almost unheard-of...There were also plentiful supplies of alcohol and this was a more serious matter." General der Infanterie Ludendorff issued a reminder that Operation Blücher's main purpose was to "threaten Paris," which spurred Allied Reserves to depart from Flanders. The four British divisions in the sector had been reduced to composite battalions. That night the U.S. 2nd Division and 3rd Division left for Chateau-Thierry.

Post-battle assessment of Operation Blücher was impressive. They caught Général Duchêne's 6 armée totally by surprise and advanced 60 kilometers in four days, with 50,000 prisoners and 600 guns captured.

Rogerson's account is a quick read, full of British humor and insight on the prevailing misery of the time, and a good account of action at the front from this fast-paced advance of Operation Blücher. The similarity between the British experience in The Last of the Ebb and the story of the American 102nd Infantry, 26th Division, at Seicheprey one month prior is worth noting. The Allies obviously had problems quickly sharing tactics and techniques experienced on the line. The Last of the Ebb is a valuable addition to any collection of primary source accounts of battles on the Western Front in 1918.

The best complement to reading and understanding Operation BLÜCHER's offensive is found in these excellent sources:

Our reviewer, Terrence Finnegan, has written his own analysis of the character of operations in 1918 in A Delicate Affair: America Learns How to Fight a Modern War in the Woëvre Trenches.  An autographed first edition is now available for $22.00 plus postage. 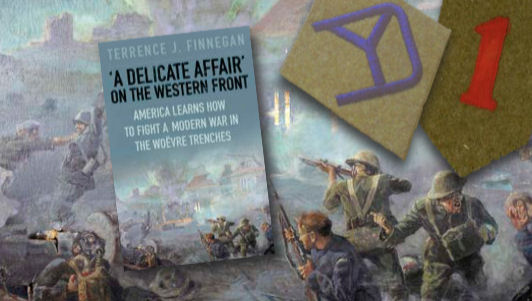