Albert Robida: The Futurist Who Visualized the Great War 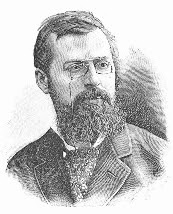 Albert Robida (1848-1926) was a French illustrator, etcher, lithographer, caricaturist, and novelist. His work in which he
visualized coming warfare appeared in two waves.

From 1883 to 1890 he published a remarkable series of magazine pieces and books that addressed future wars, the most famous being "La Guerre au vingtième siècle" (War in the Twentieth Century). His war scenarios are sometimes fantastical–Mozambique takes on Australia in 1975–but his caricature-style drawings capture many aspects of the Great War of the future struggle. 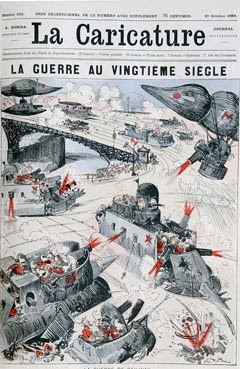 Robida examined every dimension of future life, but after the turn of the century he returned to future war as a favorite topic and income producer. In a brilliant series for the magazine La Guerre Infernale he covered the same territory, but this time drawing in a more realistic style, updating the look of his soldiers and their weaponry. Once again (see above), his work captures the grimness of World War I battlefields, and the use of airships as a terror weapon.