The Railway Mail Service Goes to War: Bringing the Mail to Doughboys in World War I, Part I

As we near the Centennial Commemoration of World War I, a number of stories begin to emerge of that time that bring “the war to end all wars” to life for us 100 years later. As a veteran, like many veterans, I remember hearing during my time of service: "Never mess with a soldier's chow or mail if you want to keep the troops happy."

My story is about one half of this equation:--the speedy delivery of the mail to and from the troops at the front, on ships at sea, or on faraway bases and places in World War I. Researching the history of the Railway Mail Service, I came across how the mail got to the troops in World War I was different from all American wars since that time.

Before the Army Post Offices (APOs) and Fleet Post Offices (FPOs) of WW II (up until the present) that were staffed by uniformed military personnel, much of the mail for the troops in WW I was sorted and delivered in large part by civilian Railway Post Office (RPO) clerks of the Railway Mail Service (see: http://www.postalmuseum.si.edu/RMS/ ).

In reading Mail by Rail—The History of the Postal Transportation Service by Bryant Long and William Dennis (New York: Simmons-Boardman Publishing Corporation, 1951), I discovered that the civilian Railway Mail Service (RMS) took complete charge of all mails for the AEF forces overseas in World War I.  After April 1917 railway mail clerks were exempted from the draft, but thousands of them enlisted anyway, leaving behind undermanned Railway Post Offices that became choked with mail for military camps in the United States and overseas.

From July 1917 to June 1918 the U.S. Railway Mail Service (RMS), using civilian RPO clerks and supervisory personnel to bring the mail to AEF troops in France and staff two large mail terminals, one in Bordeaux, France, and the other in New York City, to gathered and directed all mails to the troops and back to their families in the first year of combat operations in France in WW I.

A number of U.S. Post Office employees of the Railway Mail Service left their jobs on Railway Post Offices on trains in America and volunteered for service in France to bring the mail to the troops (http://postalmuseum.si.edu/collections/object-spotlight/special-passport.html ).

These RPO clerks worked supervising many of the APO’s in France or worked in the Bordeaux Terminal RPO in Bordeaux, France or on one of the 18 RPO train routes that, according to  The Postal History of the AEF, 1917-1923, edited by Theo. Van Dam and the WW I Study Group of the War Cover Group (Fishkill, NY: The Printers Stone, Ltd., 1990), serviced an AEF Army Post Office (APO) network by the end of the war of 275 AEF Army Post Offices (APO’s) on these RPO routes (APO 701 to APO 975). “Civilian Postal Agents attached to the Army (General Orders, No. 9, dated July 9, 1917 were to wear a distinctive brassard displaying the letters ‘P.A.’ “ (Van Dam, p. 8).

Long & Dennis expand on the WW I story of the Railway Mail Service overseas with the AEF in World War I:

In France was created, mostly by RMS personnel detailed to the AEF Postal Administration, the largest network of military RPO lines and terminals ever set up by Americans at any time. By 1918 eighteen American RPO’s and six additional closed pouch lines had been activated on the French railways; plus the new Bordeaux RMS Terminal, which received United States-bound mail from the lines and sorted 84 percent of it out to direct packages for American cities, towns, or RPO routes (pp. 210-211).

The Mail by Rail authors go on to tell of the network of RPO’s that ran up to, but behind the battle lines, in France in World War I. 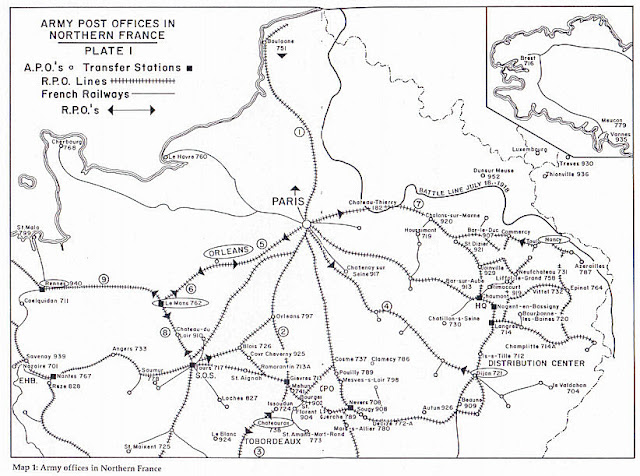 
David A. Thompson, Rosemount, Minnesota, is the son of WW I Veteran, PFC Arne M. Thompson, 34th CAC, U.S. Army.  From 1940-1962, Arne was a RMS RPO Clerk and Foreman/Clerk in Charge on RPO’s in Minnesota, Wisconsin, Illinois, and North Dakota.