First Yanks in the Air, Part I — The Escadrille 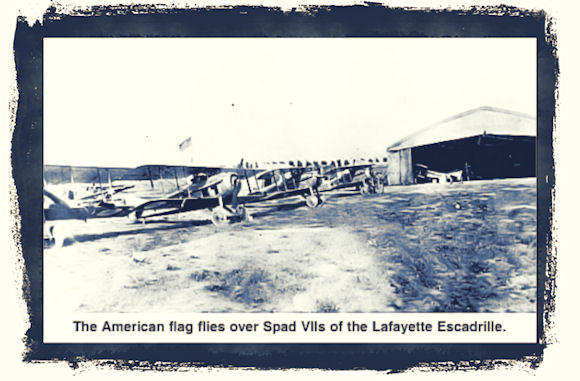 
On the morning of 18 May 1916, a German LVG appeared in the sky over Thann in the Vosges region, near the ancient French city of Nancy. The LVG was a well-armed, two-seat observation airplane, and the Vosges was a quiet sector of the Western Front, in stark contrast to the merciless slaughter taking place to the north at Verdun. Normally the two airmen could expect to do their reconnaissance with little interruption, but on this day they had left luck behind. A speck appeared in the sky to the west and rapidly grew into an enemy pursuit aircraft, an avion de chasse, an agile, single-seat Nieuport. The Germans, busy at their trade, failed to see the enemy draw near. A veteran hunter or more cautious pilot might have seized the opportunity to surprise the LVG and launch an attack out of the sun or from behind a cloud, but this one approached directly, without guile. Suddenly aware of the danger, the observer seized his machine gun and began firing while the pilot turned the airplane toward the safety of the German lines. The chasse pilot closed to pointblank range and, just as a collision appeared imminent, fired a quick burst, then swerved away. The encounter was over that quickly. Both the observer and pilot collapsed; the LVG rolled and plunged to earth. The Nieuport banked away leaving a plume of smoke to mark the scene of combat. 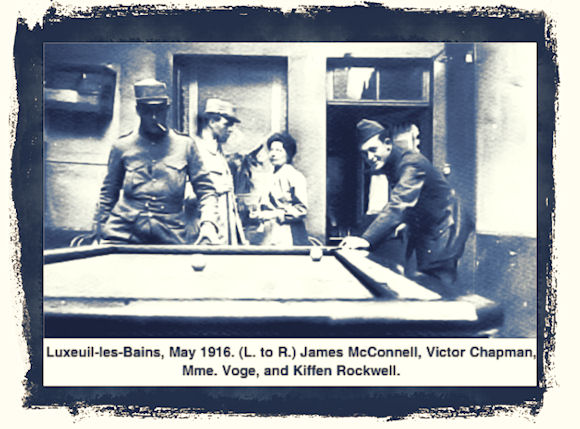 French troops witnessed the brief fight and by the time the Nieuport reached its field at Luxeuil-les-Bains had confirmed the kill. It was an auspicious event. Everything about the victorious aircraft said “France” except the pilot’s name. Kiffen Yates Rockwell was an American citizen assigned to Escadrille N.124, known unofficially as l’Escadrille Americaine, and his victory was the unit’s first. It was quick and impressive by contemporary standards of air combat. Rockwell had engaged at incredibly close range, almost sticking his gun into the enemy cockpit, but his daring attack allowed the LVG’s observer to put a hole in the Nieuport’s top wing main spar. Rockwell, in turn, killed the two men with only four bullets, a marvelous feat of marksmanship. Cheering comrades lifted him from the cockpit and began a wild celebration. A tradition began with N.124’s first victory. Rockwell’s brother Paul, serving elsewhere in the French Army, provided a bottle of 80-year-old bourbon. Kiffen Rockwell took the first drink, but the Escadrille set aside the rest. From then on, credit for downing an enemy aircraft earned the victorious pilot a shot from “The Bottle of Death.”

An additional change took place. The adventures of l’Escadrille Americaine had generated considerable publicity in the U.S., where the public was enthralled by the idea of American airmen fighting on the Western Front in this romantic new medium. Count Johann von Bernstorff, the German ambassador, however, formally protested that the American squadron violated the Hague Convention and complained that it had bombed American citizens in Germany. Secretary of State Robert Lansing brought the problem to the French ambassador, Jules Jusserand. William Thaw, home on leave, addressed the situation, telling reporters that only the press called the unit l’Escadrille Americaine; its official name was N.124, while the French minister of war unilaterally announced that henceforth the unit would be called l’Escadrille des Volontaires, a pronouncement that pleased no one. 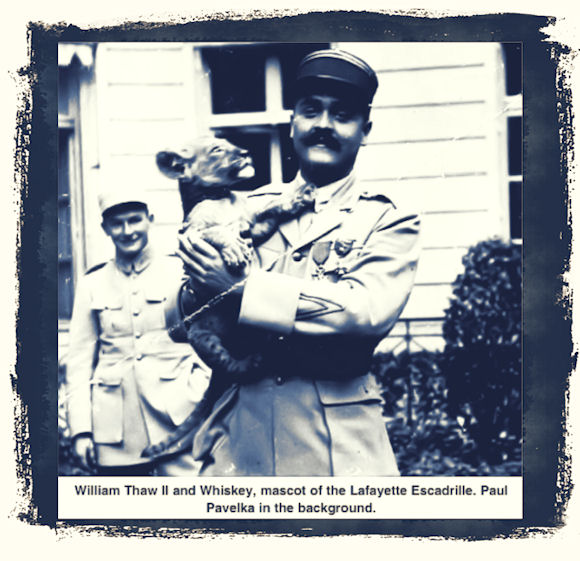 Eventually, someone suggested l’Escadrille Lafayette in honor of the Marquis de Lafayette, a French aristocrat who had fought for American independence during the Revolutionary War. Dr. Gros always claimed credit, but the name was logical and had been around for a bit. Monsieur de Sillac had referenced Lafayette in a letter in mid-1915, and in a July 1916 article in Collier’s magazine, former president Theodore Roosevelt called the airmen “Lafayettes of the Air.” The name proved popular, and, to German frustration, the unit’s fame and prestige continued to grow under its new official title.

Source: LIKE A THUNDERBOLT: The Lafayette Escadrille and the Advent of American Pursuit in World War I by Roger G. Miller from the USAF Museum