The First Blitz: Bombing London in the First World War 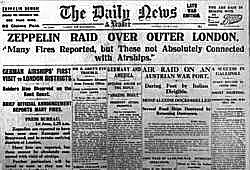 With this book, historians of the Great War have an accessible, eminently readable volume covering German airship and bomber raids on London during the war. Author Ian Castle is an expert on the "London Blitz" and has several books to his credit. This current effort combines some of his previous work into a single, updated volume.

First Blitz is divided into two parts. The first deals with German airship raids on London, while the second deals with German airplane (bomber) raids on London. Castle recaps the development of airships in the early 20th century, and their use by the German Navy and Army. Later, he discusses the development of the German Gotha and Giant bombers used against England in 1917 and 1918.

In order to counter the German airship threat, the British arranged a series of searchlight and anti-aircraft batteries throughout the country. Likewise, the Royal Flying Corps (Army) and the Royal Naval Air Service, at different times, held responsibility for the aerial response to the raids. The British struggled to find the correct combination of incendiary bullets and aerial bombs to counter the airships; in the end, British aircraft used a combination of incendiary, explosive, and tracer bullets in turn, thereby puncturing airship fuel cells and igniting the escaping hydrogen-oxygen mixture. Most of the British airplanes in use could not easily out-climb the airships, so aerial bombs, which had to be dropped on top of the airships from above, were not practical.

Each of the nine airship raids on London is covered in some detail. Castle identifies the German commander of each airship, and he describes each airship's approach and "bomb run." There were, of course, raids on other parts of England, but these are only covered in an incidental way.

The first London airship raid was flown on 31 May/1 June 1915, and the last occurred on 19/20 October 1917. Although there were more than nine raids scheduled, adverse weather and mechanical problems caused many missions to be scrapped or altered in flight. The Germans used several different types of airships; although each wrought some death and destruction, by 1917 both the German Navy and Army decided that the raids on London were not fruitful enough. The final airship raid over England took place in August 1918.

The first bomber raid on London was by a solo aircraft on 28 November 1916, and the next, also a solo effort, was on the night of 6/7 May 1917. But the concerted effort to bomb London by fixed-wing aircraft didn't start until June 1917. These bomber raids surprised the British because they took place in broad daylight, in contrast to the nighttime airship raids experienced up to that point. England didn't even have a suitable civilian air defense warning system at the time. The British needed to borrow men and equipment from the front in France in order to bolster homeland defense. This did not go over well with the generals prosecuting the war in France, and most loans were of a short duration. The last and largest bombing raid over London took place on the night of 19/20 May 1918.


This fine book is basically a play-by-play account of airship and bomber raids over London; the author covers both British and German activity and adaptations, in addition to major personalities on both sides. The photographs, maps, and illustrations in and of themselves make this book worthwhile. The maps in particular are fascinating; they show, in large scale, the ground tracks of the airships and bombers over the target area and impact points of individual bombs. Gleaned from military, police, and fire reports, the maps are important visual aids when studying these raids. Castle also tallies the numbers of people killed and wounded, plus the monetary value of the property destruction of each raid. Specially commissioned artwork rounds out the fine visual appeal of the book. There are no footnotes or endnotes, and the "select bibliography" is all too brief. I highly recommend First Blitz to anyone interested in aerial warfare, British military history, or the history of the home front during the war.