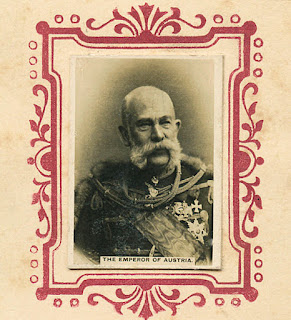 One hundred years ago ended the nearly 68-year reign of one of the Central Powers' leaders, the supreme ruler of the Austro-Hungarian Empire, the Emperor-King Franz Joseph I.

Winter came to Central Europe in early October 1916. Damp days and a bitter wind greeted the first snowfall at the Schönbrunn Palace during the last days of the month. Franz Joseph was busy poring over reports from his high command, the AOK (Armeeoberkommando). The Russian advance, which had threatened to break into the Hungarian plain, had been halted and the enemy troops were being pushed back down the Carpathian Mountains; Romania had entered the war against the Central Powers on 27 August and had advanced into Romanian-populated areas of Hungarian Transylvania. A multinational force under the command of the German general August von Mackensen had stopped the Romanian advance and was itself advancing into Romania. The diplomatic discussions progressed about the formation of a puppet Polish kingdom, intended to be ruled by the relatively Polish Archduke Charles Stephen,  who lived in the Austrian Galicia and spoke Polish, although his candidacy had been rejected by both Chief of the German General Staff von Falkenhayn and German Chancellor Bethmann-Hollweg at the beginning of the year.  The German governor general of occupied Poland, General Hans Bessler, issued the Proclamation of 5 November, which promised the creation of an independent Poland but did not specify the future government or borders of this promised Polish kingdom. The Austrian occupation government issued a similar statement from Lublin. The proclamations only encouraged thoughts of an independent Poland among Poles and Allied leaders. In fact, the guarantee of an independent Poland became the thirteenth of President Wilson's Fourteen Points.

Franz Joseph was also involved in the discussions about the formation of a new government for the Austrian half of the Empire, under the newly appointed prime minister, Ernst von Koerber. Consideration of these problems left him exhausted. In the beginning of November his mind was occupied with thoughts of his dear, departed ones during the Roman Catholic Feasts of All Saints and All Souls: his wife, the assassinated Empress Elisabeth and his son, the suicide Crown Prince Rudolf. His bronchitis at the end of October led to a persistent cough and fever by 6 November. His personal physician, Doctor Joseph von Kerzl, recognized the symptoms of pneumonia. On the afternoon of Saturday 11 November 1916 a warning telegram was sent to the new heir apparent after the assassination of the Archduke Franz Ferdinand, the Archduke Karl, who was traveling in Saxony after having met with von Hindenburg at the latter's East Prussian headquarters, but by the time Karl got back to the Schönbrunn Palace on Sunday night, the old emperor seemed to be in much better health. Like the pneumonia scare of 1914, Franz Joseph seemed to be shaking his infection off.

By Wednesday 15 November the effect was so remarkable that the two daughters, the Archduchesses Gisela and Marie Valerie, hesitated before making the short drive from Vienna to the Schönbrunn Palace, should the gathering of the family scare their father. But by Friday Franz Joseph's temperature had begun to climb again. Doctor Kerzl urgently sought the advice of the celebrated pulmonologist, Hofrat (privy councilor) Dr. Ortner, from one of Vienna's famous hospitals.

Sunday 19 November Franz Joseph was too weak to leave his room. He heard mass from bed. His dear friend, Katherina Schratt, came to visit that afternoon.  As she got ready to return to the convalescent hospital in Vienna for wounded officers where she was a volunteer, Dr. Kerzl pulled her aside and asked her not to come back on Monday. Franz Joseph was to have a day of complete rest.

The Archduchess Marie Valerie was intent on her father receiving the full ministrations of the Catholic Church, in case he should die. She made sure that the court chaplain, Dr. Ernst Seydl, was nearby. Dr. Seydl heard Franz Joseph's confession on Monday 20 November. Franz Joseph's favorite granddaughter, the thirty-three year old Archduchess Elizabeth, his son Rudolf's daughter, was at the bedside too.  Against doctor's orders, Franz Joseph worked tirelessly all day at his papers, but a few minutes before 5:00 p.m. on Tuesday 21 November the adjutant, Baron von Margutti, was told not to expect the normal 5:00 dispatches that day.  Margutti hurried over to Schönbrunn from the Vienna Hofburg Castle and waited for the doctor's reports in the small adjutant's office with Count Paar, another adjutant, and Furst (prince) Montenuevo, the court chamberlain. The Archduke Karl, dressed as an Austrian General der Infantrie (full infantry general) came in from time to time in a state of extreme agitation. He believed he would be the new emperor before the night was over. Baron von Margutti still had some work to take care of back at the Hofburg Castle, but he came back to the Schönbrunn at 8:30 p.m. He asked Dr. Ortner if the crisis had passed.

"Crisis?" replied Ortner. "It's the end! Hardly an hour now."

Franz Joseph still worked at the desk in his bedroom even though his temperature had risen to 102 degrees Fahrenheit. Finally he allowed his valet, Eugen Ketterl, to help him into his bed. Ketterl asked if there would be anything else. Franz Joseph asked for a wake-up call at 3:30 a.m. ("um halb vier.") There were still many papers that needed his attention. As Ketterl helped him to sit up in bed to drink some tea Ketterl heard him mumble "Why must it be now?" He was only just conscious when, at 8:30, Dr. Seydl administered the last rites. By 9:05 p.m. on 21 November 1916 he was dead at the age of 86 after almost 68 years on the throne. With him passed a whole way of life and, soon, the Austro-Hungarian Empire.