A Must See at Péronne's Historial de la Grande Guerre


One of the lasting memories of my recent Centennial Tour is from our visit to the Historial at Péronne. In the past my groups have not responded especially strongly to the displays. My impression was that it over-emphasized the cultural aspects of the war in general, and neglected, or at least de-emphasized the actual combat.  I discovered, however, that in the three years since I had visited the Historial, they have done some re-modeling to make the presentation much more effective. I'm not sure whether they have added that much to the collections, but the sequence of displays has changed. One conspicuous revision is the prominence give to the work of German soldier, veteran of the Somme, and artist Otto Dix.  In 1914 Otto Dix, a student from the Dusseldorf school of Fine Art, volunteered at the age of 24 to serve with the German Army.  In 1915 he painted this extremely martial self-portrait and wrote, "I am a realist who must see for himself to confirm that something happens as it does. I must experiment all the abysses of life. That is why I volunteered for the army." 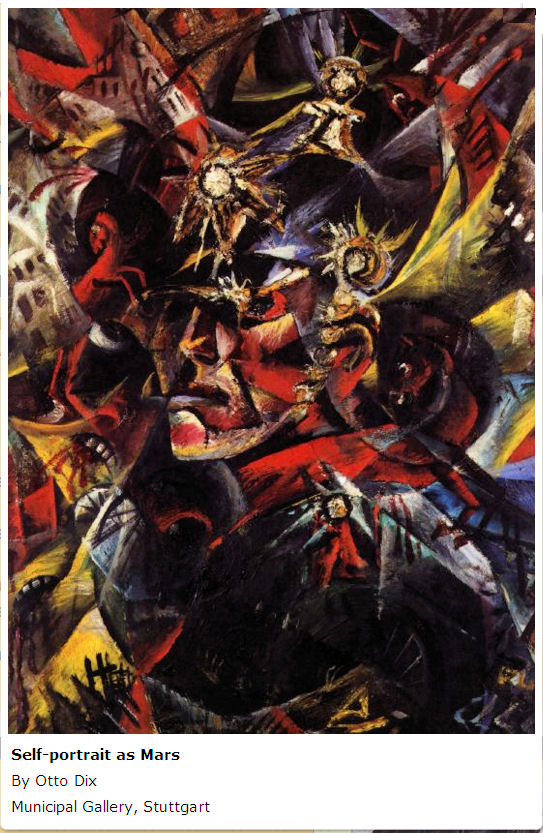 During his four years of war, Otto Dix fought on every front (he was in the Somme in 1916), was made a non-commissioned officer, and was awarded the Iron Cross (2nd Class). Confronted with the violence and horror of war, however, his initial exaltation was replaced by disillusionment. After the war, and already a master of German Expressionism, Dix's work — greatly influenced by his fellow veteran George Grosz — became anti-militarist, portraying hatred for war in a violent and passionate way. Fifty of his etchings are on display at the Historial, a complete set of his have been brought together in one of the rare complete boxes of the Der Krieg (The War) series. They are presented at the start of the recommended course through the Historial's displays, and they set a powerful tone for visitors. 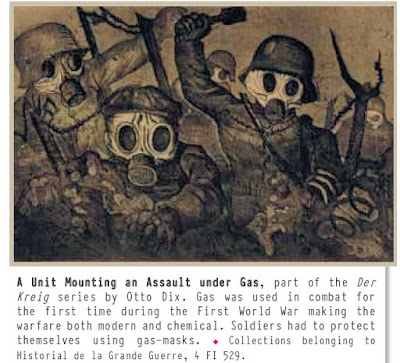 This cycle, inspired by “The War Disaster” by Goya, corresponds with the artist's need to erase from his memory the horrors of his wartime experiences. Dix recounted, "The fact is, although young at the time, one doesn't realise just to what extent the shock was profound. For at least ten years I have dreamt that I was crawling through ruined houses or corridors where there was scarcely room to pass. The ruins were always present in my dreams." 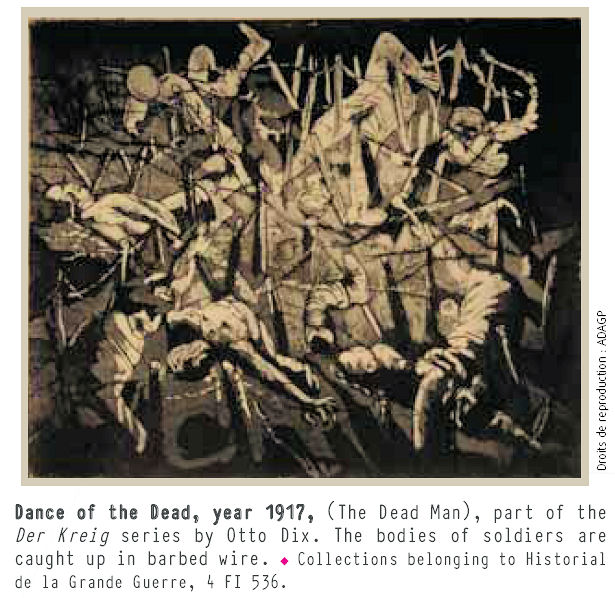 Der Krieg explores the macabre theme of a horrible daily chronicle. Themes of destruction, deformation and mutilation of the human body emerge from an atmosphere of chiaroscuro to present a vision of the apocalypse. Most of the scenes depicting the objective despair of death take place in Somme or in Picardy, where Otto Dix fought.