On 17 November we published the the photo below requesting an explanation of the lower section of this memorial, which I originally thought was related to the Second World War because of dates indicated just below it.  A day later we revised the post when it was pointed out that the 1939–1945 banner was tacked on in 1995 (the original memorial was dedicated in 1927.) Also, we corrected the location as the town of Ettlingen, which is near, but not in Karlsruhe, Germany, itself. 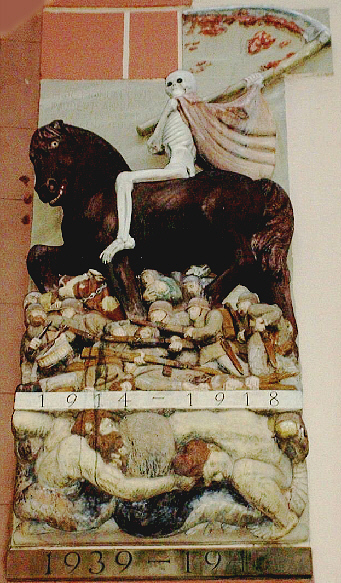 The full sculpture it seems was originally exclusively connected with the First World War.  Also, it now can be seen as having three sections: top – Grim Reaper (symbolism clear), soldiers fighting in the middle (symbolism obvious), and then the mysterious lower section (erroneously labeled by me the 1939–1945) section, which is clearly in some subterranean zone with respect to the upper pieces.

Now, with all these changes and mistakes I made in the original article, there is case for throwing out the contest. However, a number of submissions came in that met some (but not all) of the requirements of the contest. So I decided to continue the contest and evaluate the contributions and make awards as seemed appropriate.

In the revised rules for the contest I stated the winning submission would include explanations of who the combatants are, whether they are fighting each other or some snake-like monster, what the bowling ball-like object represents, what exactly the thingamajig on the far right is, and why both parties are red-headed.

No submission answered all of these points. So there will be no Grand Prize Winner declared. However, two readers sent details that were insightful and made progress toward a full explanation of the lower section. I declare these two readers to be Co-Runners-Up. Some extracts from their submissions are included below.

Name: Unknown
Date: 17 November 2016 at 10:32 AM
It's a bas-relief, yes? I saw it in 1977. A then-girlfriend tried to explain it in her broken English and my poor German. As I recall it's a Wagnerian scene of two Germanic gods wrestling over the soul of man.

Commonly known as a "Pacifist War memorial" . . . In the `underground´ area, a battle plays out between two brutal giants, wound in the coils of a snake. To me the snake might symbolize being grasped by something tenacious that won’t let go – i.e. hate.

Both parties will be awarded our WWI Musical Hit Parade CD. They can claim their prize by sending their mailing address to me at greatwar@earthlink.net.

Congratulations to the Co-Runners-Up and thanks to all contributors in the contest.