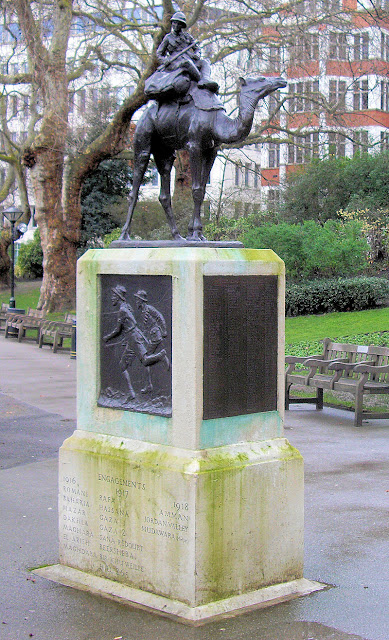 One of the more colorful formations of the war, the Imperial Camel Corps (ICC) was initially manned in 1916 by some of the Diggers, the Australian soldiers, who had recently fought at Gallipoli.

These "cameliers" of the ICC were actually mounted infantrymen who patrolled and rode to battle on their "ships of the desert" but fought on foot. Eventually four battalions of 184 men and officers each were organized, becoming a vital part of the Egyptian Expeditionary Force. When deployed, they were supplemented by engineers, machine gunners, and a mountain artillery company. Two of the battalions were composed of Aussies, while British, Indians, and New Zealanders served in the
other formations.

The ICC saw extensive action for over two years, their combat resume including the suppression of the Senussi Revolt, the important, but little known action of 1916, the Battle of Romani, the Gaza and Palestine Campaigns, and support of the Arab Revolt. By October 1918 General Allenby's forces had advanced to the hilly territory of northern Palestine where horses fared better than the camels, so most of the corps was reassigned to infantry or mounted infantry units for the close of the war. The last ICC battalion (the 2nd) was not disbanded until May 1919. The monument to the ICC shown at the top of this article stands today in the Victoria Embankment Gardens in London, and honors the 246 members of the corps who fell in action.