Selling the War to Children 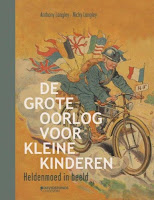 [Editor's note: Tony is a regular contributor to all our publications at Worldwar1.com. He is an authority on the children's wartime literature. His book on the subject titled De grote oorlog voor kleine kinderen: heldenmoed in beeld, which he wrote with  his sister Nicky, never found a publisher who was willing to translate the work to English. However, the collection of wartime illustrations (some of which are shown here) are tremendous, and the work is still available from the Dutch publisher at:
http://www.davidsfonds.be/publisher/edition/detail.phtml?id=2956 ]


When the Great War started in 1914, magazine publishers held a preeminent position when it came to disseminating news. Due to a growing population of literate and news-hungry readers of all ages, there was an enormous market for all kinds of printed material. With the advent of paid advertising in magazines and the means of rapid distribution and cheap printing, by 1914 virtually every niche market segment had publications catering to that particular group.

Children and youngsters too had many kinds of weekly or monthly magazines to read. There were inexpensive and cheaply printed comic book-like weeklies, as well as upper-class literary inspired magazines. Most were more or less profusely illustrated, partially in color, often by talented but unknown commercial artists. These illustrations were striking and eye-catching, certainly when used as cover art.

Seen now, almost 100 years later, they can seem very bold and show quite violent or often jarring scenes of, for instance, youngsters toting rifles or wielding bayonets, killing enemy soldiers in battle or behind the lines or about to be executed themselves, often in very horrid circumstances.French children's magazines most notably were patriotic to a fault and encouraged the military virtues. Since the war was seen by the French as a struggle for national survival, every member of society was obligated to do their bit. At least so it was seen and portrayed by magazine editors. "Il n'y a plus d'enfants!" (There are no more children!) was a hallmark characteristic of much French publishing for children. Even more or less officially sanctioned schoolbooks or readers brought across this idea to young readers.

In contrast to the militant encouragement of youngsters taking up arms to defend their country, German children's magazines tended to reinforce the idea that war was far too serious a business for children to participate in. Their task was to remain at home and study diligently, help out with chores, and relieve mothers of any anxiety about their absent spouses by being well behaved and studious. Great care was also taken to explain the technical aspects of warfare, how trenches were built and set up, how ammunition was manufactured, and the symbolism of medals and uniforms.

British children's magazines tended to treat the war as a boy's adventure story, with young, plucky, persevering children having the time of their lives and saving the day in some minor way at the end of the day, say, by uncovering a dastardly spy or delivering an important message to the front in time. But whatever the national characteristics may be, one thing is quite certain. The contents and especially the wartime imagery contained in children's magazines during the Great War would be unpublishable in our present day.